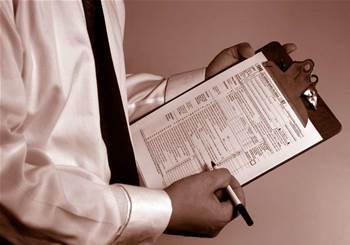 The federal government has rejected a damning report into the Department of Human Services' 'robodebt' program that recommended it be immediately and indefinitely halted.

A long-awaited report into DHS' data matching and debt notice program was published late on Wednesday by the senate standing committee on community affairs.

The system matches earnings reported to Centrelink against employer-reported income data held by the Australian Taxation Office (ATO), with an automated system flagging any discrepancies and sending a 'please explain' notice to individuals.

But a common complaint is that Centrelink averages payments into fortnights even though the ATO only deals with annual payments, causing discrepancies for seasonal workers who only earn income for part of the year. The onus is then automatically placed on the individual to clarify any gaps.

In its report, the Labor, Greens and independent contingent of the committee - making up the majority - was heavily critical of the program, which it said should be immediately put on hold until issues can be addressed and the report's 21 recommendations can be implemented.

Any subsequent redesigned system must be subject to a risk assessment - which the robodebt program was not - before being put into production, and anyone subject to either the new or old system should be provided the data that was used to calculate their debt, the senators wrote.

The committee also said that all those who had been assessed under the OCI should have their debt amounts immediately reassessed by a team of specialist officers using "accurate" income data.

It made a list of other recommendations on how suspected debts raised under the OCI are communicated, reviewed, and calculated, as well as on exclusion criteria, to address highly public usability and transparency issues.

However, the committee's four government senators argued DHS had already made tweaks to the system that addressed many of the community's concerns. The agency is planning to expand the program, and has committed to manually checking discrepancies before letters are sent out.

They admitted that the initial rollout of the program last year lacked proper "robust planning and consideration of the impact and operation of increasingly moving to digital engagement", and that individuals weren't provided enough information upon receiving a debt notice.

"Coalition senators acknowledge the evidence given by some recipients from the early stages of the OCI [online compliance intervention] rollout about the confusion they experienced in being advised of a debt and in providing the information requested," they wrote in a dissenting report.

But they denied the rest of the committee's claims, including that the process "lacked procedural fairness".

"... review avenues remained open to recipients, and still do to this day – any person with a debt arising from OCI can request a review and provide new information at any time," the government senators wrote.

They largely pointed to an April Ombudsman's report that found the technology underpinning the program was sound, but the department had been "deficient" in its delivery and communication of its efforts.

They also claimed that the #notmydebt online movement against the program was "aimed solely at scoring political points and inflaming the situation rather than offering practical assistance in resolving the issues raised".

The government senators thanked all those involved in the inquiry but did not commit to any changes to the robodebt program.

The Coalition expects to save $3.7 billion over the next four years by identifying welfare overpayments.