The first neighbourhood in Kansas City is having homes connected to Google's fibre network in the US city from today.

Google Fibre's director of service delivery, Alana Karen, announced that residents of the Hanover Heighs "fibrehood" will be the first to be able to go live on the network which has been under construction for the past year-and-a-half.

Aside from residential houses, Google Fibre will also connect the Kansas City Startup Village community project, which aims to put the mid-west city on par with entrepreneurial areas such as Palo Alto, Las Vegas and Boulder.

Some 180 neighbourhoods in Kansas City, which has approximately 460,000 people in the city itself and just over two million in the entire metro area, will be able to connect to Google Fibre.

The project started as an experiment by Google in February 2010 with the aim to provide ulta-high broadband speeds for bandwidth-intensive next generation apps, to test new deployment techniques and to implement an open access network where users have a choice of multiple service providers. 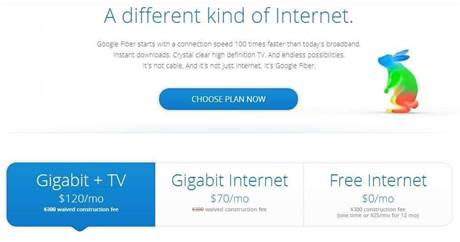 As part of the project, Google Fibre offers a free service at what it says is today's average speeds of 5 Mbps download and 1 Mbps upload, with no data caps.

The service is guaranteed for seven years and includes a network termination box, but users will have to pay a one-off construction charge of US$300 ($288) either in one go, or in monthly instalments over a year.

The standard service offering on Google Fibre is otherwise 1 Gbps symmetric speeds, with no data caps or installation charges. This costs either US$70 a month ($67) or US$120 ($115) if users opt for an Internet-delivered television service on top of data.

A terabyte of Google Drive cloud storage is also included with the paid subscription plans, as well as a Nexus 7 tablet, a network termination unit with Wi-Fi and four gigabit Ethernet ports, and a storage box with two terabytes of capacity.