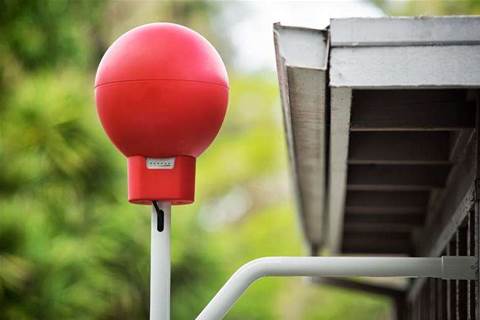 Google's mission to bring internet to regional areas of the world ﻿via high-altitude balloons has arrived in Australia, as the company prepares to kick off a 20-balloon trial with Telstra in Queensland.

Google's Project Loon officially commenced in New Zealand mid-last year, when the company launched 30 ballons in the skies above Canterbury in the south island to test whether reliable internet services could be delivered to 50 users in under-served areas.

The balloons - which span about 15 metres in diameter and carry 10kg of kit - are operated by adjusting their altitude based on wind directions and atmospheric layers.

Users of the service connect to the internet through a dedicated antenna attached to their premise, which communicates with the balloon network and back onto a ground station acting as the point of interconnect for the user's internet service provider.

Google's latest Project Loon trial in western Queensland, as first reported by The Australian, will see Telstra provide Google with access to its 2.6GHz spectrum and terrestrial base stations.

The trials will commence in December and will run for an undefined period of time, a Google spokesperson confirmed.

In contrast to the NZ trial - which was aimed at proving the concept and testing the service with users - the Queensland trial will focus on testing the balloons' connectivity with Telstra's infrastructure.

Google is currently only partnering with Telstra but is understood to be open to working with other providers in the future.

"We are excited to be working with Google on Project Loon," a Telstra spokesperson said in a statement.

"The trial will allow us to jointly test the potential of this technology for the Australian environment."

The results of the pilots will help determine whether the novel approach would be able to deliver internet services to regional and remote areas around the world.