Google staff in Sydney walk out 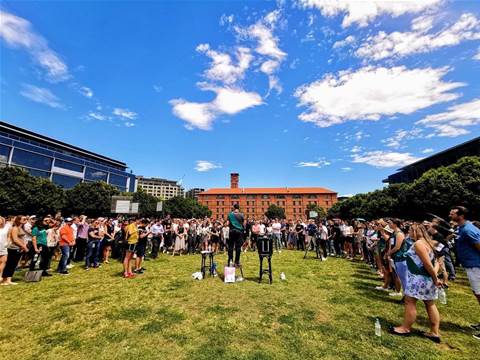 Staff at Google’s Sydney headquarters look to have joined their peers across the world in the now global #GoogleWalkout protests against inaction over workplace sexual harassment and racism, but it’s unclear whether the action has been authorised by local management.

Hearing some harrowing stories at the #GoogleWalkout in Sydney pic.twitter.com/XEMS8wkO39

A crowd gathered outside Google’s Offices in Pyrmont in Sydney just after 11am local time with number bolstered by onlookers from neighbours Fairfax Media and Accenture.

The Sydney protest held in stifling heat comes at the tail end of the Google employee protests that started in Singapore and went on to include Dublin and New York.

Solidarity with our neighbours, Google, on their walkout in Sydney today. (We aren’t the ones on strike this time :open_mouth:) pic.twitter.com/LUdUu9J6SG

Google did not provide a response to questions or a request for a statement from iTnews.

Google’s management is facing increased blowback from many of its workers over both the ethical direction and management culture of the company, with management previously backing down over participation in the US military’s Jedi program.

Google’s workplace protests are somewhat of an aberrance for staff working in the intensely competitive tech industry which for the most part is largely non-industrialised with staff and management largely employed on individual contracts rather than collective agreements.

Sydney’s organised walkout could be precarious in a legal sense because while there is no official union coverage at Google, the company could still attempt to have it stopped as an unauthorised industrial action.

Here are the tech heads revolting at #GoogleWalkout on a very hot day in Sydney pic.twitter.com/m009IeCTXk

That, however, seems highly unlikely with Google’s management openly trying to soothe the anger of many employees over alleged efforts to sweep harassment under the rug.

The wave of protests erupted after the New York Times last week reported that Google in 2014 gave a $90 million exit package to a senior vice president, Andy Rubin, after he was accused of sexual harassment.

The prospect of staff and contractors organising against management at Google and potentially other tech companies is a potential nightmare for companies which have for decades thrived without feeling heat from unions, unlike the manufacturing and transport industries.

Here at the #GoogleWalkout in Sydney where employees are congregating in the park between the two offices. Some union peeps say they’re expecting a full walkout pic.twitter.com/VtkNCbwtro

In Australia union membership in technology workplaces remains low, with some outsourcers like the former EDS, now DXC, picking up members after they took on whole-of-agency deals in the 1990s.