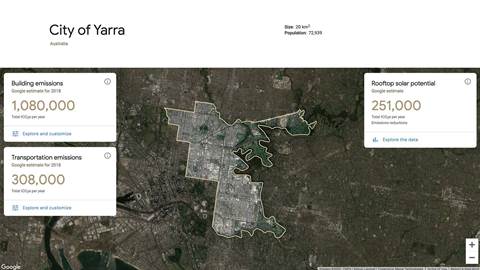 Google has expanded its greenhouse gas emission monitoring and planning tool to include more than 100 local council areas across Australia as part of an extension of the platform to 3000 cities around the world.

The platform, called the Environmental Insights Explorer or EIE, is central to Google’s ambitious plan to motivate and assist urban planning authorities in 500 cities to reduce GHG emissions by a billion tons per year by 2030.

Prior to today's announcement the EIE was available in around 122 cities, with Melbourne planning authorities among the first handful to get access to the tool after its initial launch in 2018.

Sydney, Canberra and Adelaide followed in 2019, and from today Google said that the data would be made available to “100+” Australian councils.

The EIE combines Google’s mapping, building and transport data with machine learning to estimate GHG emissions and help urban planners understand the impact of their policies and projects on their carbon footprint.

It can also use building data to identify potential to use solar energy to reduce emissions.

In its official blog for Australia, Google said that the tool was established to spare city and council authorities the cost and drudgery involved in collecting the data themselves and establishing the infrastructure to analyse it.

“Without this information, cities can neither understand the challenges they face, nor the impact of their environmental policies,” Google wrote.

The pair have worked extensively with councils and community groups to reduce GHG emissions, and cooperatively on Australia’s first national emissions data tool called Snapshot, which is currently in beta testing.

Google said it would partner with the organisations to incorporate its transport data into Snapshot.

“This data integration will provide updated GHG profiles and enable local government policy decision-making for more than 86 percent of the country's population to put councils on a fast track for delivering commitments, building local resilience, and ensuring economic recovery,”
the company wrote.