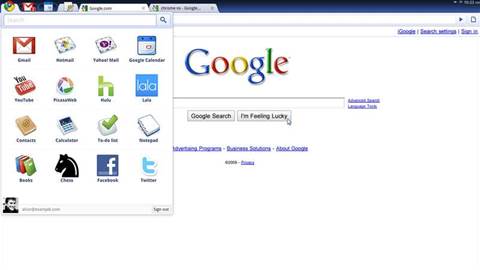 Encrypts all user data too.

The Google Chrome operating system, for which the source code was published today, is one-sixtieth the size of Windows.

In a conference call with developers from the Google Chrome OS team in California, the Google staff revealed that the OS was designed to be as lightweight as possible.

"We just did a Windows, err, another common operating system install the other day, and we are around 60 times smaller. We are much smaller than a conventional OS but we are still not happy with it - we would like it to be yet smaller," said Matt Papakipos, engineering director.

Security was as important as speed when creating Chrome OS, according to the Google developers.

Building on the security of its Chrome browser, Google will encrypt user data and also attempt to stop potentially malicious software from interfering with other processes running on the system, said Papakipos.

"Typically in an OS, the root or system partition is writeable by programs that run on the machine. We have made the root partition read-only ... which adds a certain level of protection," he said.

"All of [the user] data is encrypted, so if you lose your machine, you don't have to worry about anybody getting that drive, putting it in another computer and getting all your private data. It is cryptographically meaningless at that point.

However, when questioned about cloud-based data storage limits, the Google developers were left scratching their heads.

Although uncofirmed, it seems users of the Chrome OS will most likely be able to use some of the excess storage from their Gmail accounts, which currently offer almost 8GB of archive space.

"A lot of people are in Google's cloud already through Picassa, Google Docs or Gmail - it all fundamentally comes from the same pool.

"If you look at the cloud, it is starting to get quite a bit cheaper. There is a lot of competition out there. Amazon, Google, Microsoft - the one thing I can say is that the prices are definitely going to fall. I will not get fired for saying that," said Sengupta.

Aussie influence
The Chrome OS has, like many of Google's recent innovations, some Aussie influence. Glen Murphy, a lead designer and software engineer for both the Chrome browser and operating system, grew up in Melbourne and moved to the US to take a job with the search giant four years ago.

Murphy told iTnews he "started interviewing when the Sydney office was in its early stages" and he "started the job the day after he got off the plane".