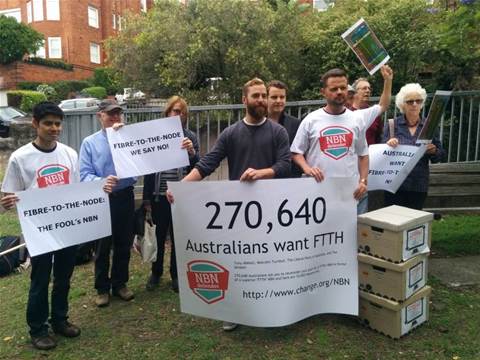 Around 15 supporters of Labor’s vision for the national broadband network turned up at Communications Minister Malcolm Turnbull’s Sydney office this morning to hand over a petition in favour of a fibre-to-the-premises NBN.

The group presented the office with a 270,000-strong petition imploring the new Coalition Government to revert to Labor’s plan for an FTTP network over the Coalition’s preferred fibre-to-the-node model.

The petition was launched in early September by a Queensland university student and was quickly dismissed by Turnbull. Turnbull was not present at today's handover.

It called the Coalition policy a “patchwork” short-term solution to a long-term problem. Turnbull has previously said the general public voted for the Coalition — and therefore its policies — at the September federal election

One petitioner, Vladimir Lasky, said the group was “sending a strong message” to Turnbull that he needed to start listening to the Australian people.

“The NBN is the most critical infrastructure project in Australia right now, and it needs to be built right to unlock the growth of Australia’s Information economy, education and R&D capabilities,” Lasky said in a statement.

"Fibre-to-the-node will turn Australia into a telecommunications backwater and make it a much less attractive place for business. The presence of large ugly cabinets littering our streets will be a lingering monument to our folly of accepting this inferior architecture."

The Coalition has costed its policy at $20.4 billion until completion in 2019. The Labor FTTP network was independently costed at $37.4 billion for 2021 completion.

Turnbull has previously indicated he would consider rolling out more FTTP if the price was right.