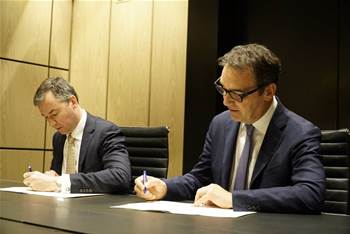 South Australia has become the first state to agree to work with the Commonwealth government on its federated digital identity program.

The two governments sealed the agreement on the sidelines of the second meeting of the Australian Digital Council in Adelaide on Friday.

The memorandum of understanding will see the pair collaborate on digital identity to simplify and improve how citizens and businesses interact with government regardless of jurisdiction.

It will allow South Australians to use both the federal government’s myGovID digital identity solution - when it is rolled out - or an equivalent state-based system to transact with either federal and state digital services.

myGovID will allow users to perform a 100-point ID check and connect to government services. It is currently being trialled with the Australian Taxation Office’s new online tax file number application service.

“The agreement reached with Premier Marshall today will enable us to share our technology and our research with South Australia to help it accelerate its own program and ensure we develop nationally consistent systems,” he said.

Reusing the federal government's myGovID solution is also expected to save SA million in development costs and allow it to deliver digital services sooner.

“South Australians have told us they want the same convenience and simplicity when dealing with the government that they already enjoy from the private sector such as their banks, retailers and even airlines,” SA Premier Steven Marshall said.

“The deal we have signed with the Commonwealth today will ensure better services can be delivered sooner, while also ensuring the privacy and security of South Australians remains protected at all times.”

The offer of the digital identity solution was put to the state and territory governments at the first meeting of the digital council in September in a bid to reduce duplication.

However in return they would also be given the option to have their own versions of the digital identity system accredited for use with federal agencies as an accredited identity provider.

The council meeting also saw agreement between SA, NSW and Commonwealth ministers around ways to improve data sharing between jurisdictions.

The deal will see the three governments’ progress with a pilot program that enables “a cross-jurisdictional data asset to be built that will help improve service deliver for people with a disability”.

The data asset will integrated data from the three governments initially, with the option for other governments to opt-in as the project progresses.

Ministers agreed that the Australian Institute of Health and Welfare - which will also be responsible for deciding whether to release de-identified My Health Record data - would be well placed to deliver this work.