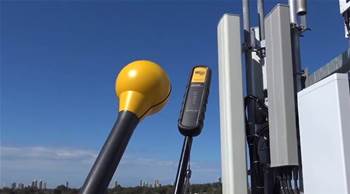 Bid to counter spread of "misinformation".

The federal government has gone on the offensive against a growing anti-5G movement in some communities, freeing-up a cash splash of $9 million over four years to get back on the community relations front foot with “additional scientific research and further public education”.

The move, announced on Monday, comes amid broader government and industry concern that US-style conspiracy theories – which cover topics ranging from public health immunisation, water fluoridation and the electromagnetic radiation – are quickly taking root in some communities.

The proliferation of community based opposition to the rollout of 5G, which is just starting to occur across Australia, is potentially a major headache for the government and telecommunications industry because of its potential disrupt infrastructure renewal and substantially increase costs.

While most anti-5G groups initially muster and organise their actions online, the political trench warfare typically starts at the local government level in the form concerned resident opposition to the construction and placement of new infrastructure.

A major issue for governments to date has been that campaigns run by groups opposed to 5G and mobile infrastructure can often move much quicker than government responses and fire a barrage of alarming claims that often go unchallenged because of slow responses.

Opposition to 5G, like the anti-vaccination movement, also straddles socioeconomic groups with growing support among both low income and high income demographics.

That sub-optimal public situation now needs to be urgently addressed, judging by the federal government’s response, with Communications Minister Paul Fletcher saying that “the Government recognises that there is significant community interest in being satisfied that rigorous safety standards are in place as new 5G mobile networks are rolled out around Australia.”

Fletcher also wants the science to do the talking – a slightly awkward tightrope to walk given previous antipathy towards the broader scientific community on issues such as climate science by parts of the Coalition, which has even extended to the health impact of investigating wind farms.

Irrespective, he’s having a go at applying rationality and evidence to an increasingly emotional debate.

“The rigorous safety standards for mobile networks and devices in Australia draw on extensive scientific research into EME [electromagnetic energy] emissions, globally and in Australia, over many decades,” Fletcher said.

“Emissions from mobile networks and devices in Australia typically fall below the regulated limits by factors of a hundred or more.

"EME levels from mobile networks and devices are typically at similar levels to familiar household devices such as microwave ovens and baby monitors."

The head and shoulders of the evidence and education response is an “enhanced’ EME program to “make sure all Australians have access to clear, reliable and reputable information so they can take advantage of new technologies like 5G – and feel empowered to do so safely.”

At the ground level, a major challenge for the government and carriers is that the 5G rollout will require many more cells in far more places at a closer distance than previous 3G and 4G cells to make it a reality, a situation that makes it naturally more intrusive and prolific.

At a minimum, the larger number of 5G cells that will have to be put in place will mean there are more debates and arguments to be had at a grassroots community level.

So expect a substantial ad campaign to accompany an upgrade to 5G in your neighbourhood when it arrives.

Peak body the Australian Mobile Telecommunications Association (AMTA) says the government response is not before time.

AMTA chief executive Chris Althaus said there was a “need to address misinformation about EME, which has caused concerns in some parts of the community.”

“Where we can, AMTA and industry will support the Government with its enhanced EME safety program and its efforts to raise awareness around credible research to maintain high levels of public confidence in the health and safety of 5G mobile networks," Althaus said.