Fastest desktop in the world launched 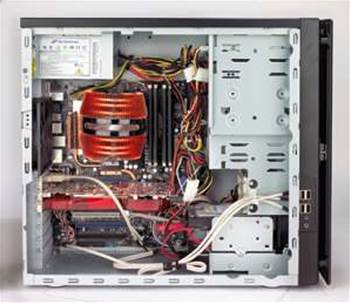 Yoyo Tech’s Fi7EPOWER MLK1610, which is built around an overclocked Intel Core i7 965 processor, runs with 9GB of Corsair DDR3 memory, an Asus P6T mainboard, and a 2GB HIS 4870x2 graphics card. The independently expensive Core i7-965 Extreme Edition - which costs £1,000 on its own - provides a 3.20GHz clock speed as well as a 25.6GB/sec data transfer average using Intel’s QuickPath. The machine also boasts IBM’s latest X58 chipset.

Yoyo Tech’s owner, who insists on being referred to as CK, noted that budget wasn’t an issue when building the super fast machine, saying, “We went back to the mindset you have as a child. Focusing 100 per cent on the ‘I Want, I Want, I Want’ mentality”.

That mentality was probably why Yoyo Tech also opted to bung an 80GB Samsung SSD into its creation, making it that much faster, quieter and... more expensive.

The Fi7EPOWER MLK1610 managed to score 130 in SPEC’s peak integer rate test, quite literally blasting Sun’s 8-core UltraSPARC system - which managed a score of 85.5 – out of the water. It also performs about twice as fast as anything powered by Intel's former top-of-the-range CPU.

Gamers may not exactly be falling over themselves with excitement, however, because the speedy Gonzalez of the desktop world only has one Radeon HD 4870 X2 graphics card with 2GB of DDR5 memory. Oh well, nobody’s perfect. But, not to fear, the Asus P6T motherboard does support AMD's Crossfire, so any punter willing to splash out even more cash could customise it and add another one.

Anyone who could afford to would have to be pretty loaded though. Pricing already starts at a whopping £4,000. CK doesn’t think this is necessarily a high price to pay for owning “a piece of history” however, noting that as well as having the fastest core processing scores ever the system also offers an additional 2.4 TeraFLOPS of pure graphics processing power.

As to who CK reckons his potential customers for the machine could be, YoyoTech’s owner believes the Fi7EPOWER MLK1610 could be perfect for professional studios who need to process ultra high-definition images and video in the shortest possible time. CK also believes it may come in useful for “designers and other artists” too.

We assume that by ‘artists’, CK means those with bank accounts more similar to ones formerly known as Prince.
Got a news tip for our journalists? Share it with us anonymously here.
theinquirer.net (c) 2010 Incisive Media
Tags:
desktopfastesthardwareinlaunchedtheworld