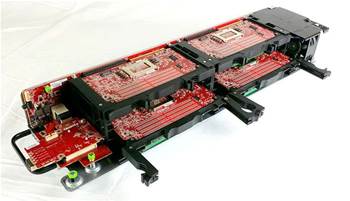 Code named "Yosemite" (not to be confused with Apple's latest version of its OS X operating system that also uses the same moniker), Facebook said the aim of the design was to "scale out" by building a growing fleet of simple, compact systems, each with a moderate amount of computing power.

That approach compares to traditional two-socket platforms that "scale up" by increasing the amount of computing power in a given system, which have the drawback of being bulky and using large amounts of energy.

Yosemite fits four SoC cards and draws up to 400 Watt of power in total. It has multiple DDR RAM channels, one or more local solid state storage interfaces and a local management controller and a single network interface.

Facebook said Yosemite will be fully compatible with the Open Rack standard. Up to 192 SoC server cards can be slotted into a single rack, the company said.

The social network has made the Yosemite design available to the Open Compute Project along with earlier projects such as the Wedge and 6-pack network switches, and a data centre fabric.