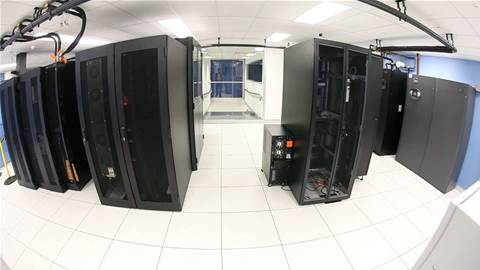 Pulls out of co-lo facility; demos switching on and off the grid.

Data centre equipment vendor Emerson Network Power has pulled its racks from Macquarie Telecom's data centre and will host its own IT in a newly built 125-square-metre facility in North Ryde.

Emerson's director of sales, Chris Mandahl, told iTnews that the company was paying commercial rates to run 20 servers in the Macquarie Telecom data centre, but recently decided to set up a new sales and service office on the fifth floor of a commercial building in North Ryde.

It decided to build a demonstration centre on the floor, and as an afterthought realised the facility would make more sense to customers and partners as a "live data centre".

"We brought all the equipment back from our co-lo provider," he said, and undertook a server virtualisation program to consolidate the company's servers from twenty down to ten - such that its ERP system, VoIP system, file and print servers and email and collaboration (Lotus Notes) suite all sit on a single rack in the facility.

"We took the view that we wanted to showcase what you could do with our technology in a live environment."

The cold aisle -- or 'SmartAisle' as Emerson prefers to brand it -- is running at 5kW per rack today but could scale to 30kW per rack in future.

In a 'cold aisle' pod, the servers face inwards in a protected zone from warmer outside air, while the exhaust pushes hot air into the general workspace. Mandahl said this could save a minimum of 30 percent on energy bills.

"We have done the sums and believe cold aisle is the way to go," he said. "For a start, it is difficult to work in a hot aisle, there are OH&S issues there. It's also difficult to leverage air from outside the space."

Eating your own dogfood

Being on the sixth floor of a commercial building, the company wasn't able to install any free cooling to illustrate the point.

But Emerson is able to demonstrate the resilience of its equipment. The facility lacks a diesel generator to ensure IT systems stay up with the electricity grid goes down.

"In the last 18 months, we've had a number of power outages in the North Ryde area - one for over six hours," he said.

Further, the company is demonstrating a dual-bus UPS system, in which it runs on both Bus A and Bus B UPS.

"With this dual-bus UPS, we can physically turn off Bus A or Bus B and the facility will keep running," Mundahl said.

Mandahl said Emerson is aiming for a "Tier III" standard of uptime within the data centre.

"We are able to demonstrate how Tier III is achieved," he said.

The facility includes an Emergency Power Off [EPO] switch, which can cut the data centre from mains power at the flick of a switch.

Mundahl said Emerson is happy to demonstrate this capability, even though its own corporate systems are running on-site.

"It is to prove that 24x7 zero downtime is a real possibility," he said.

He said there was very little possibility of human error in demonstrating the EPO capability "at any time of the day or night."