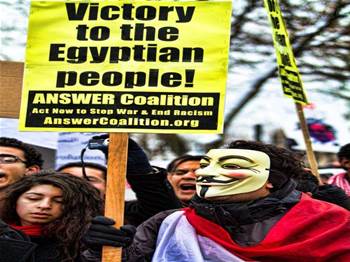 US Senate to debate 'internet kill switch' to give Obama powers like Mubarak's.

The number of Egyptians connecting to the internet using the Tor anonymity service rose more than five-fold after protests broke out last week before crashing when the Government severed links to the global internet.

Logs released on the Tor website showed that last Tuesday, about 500 Egyptian users requested access through Tor's anonymity mirrors but within two days that had swelled to nearly 2500 or about 1.7 percent of global users.

Tor allowed public internet users to communicate anonymously and privately; it was often used by those avoiding official scrutiny including human rights workers and filesharers.

Computer security expert and Tor team member Jacob Appelbaum, who created a network "bridge" to allow Egyptians to access the internet to short-circuit the crackdown, said Egyptians turned to the anonymity service because they understood the risks associated with organising online.

"People are concerned and some understand the risk of network traffic analysis," Appelbaum told SC Magazine in a tweet. "They're using Tor for that reason and more."

Appelbaum, a high-profile associate of the Wikileaks whistleblowers' site, said the "irony was rich" in how the US Government that supported the pro-democracy protesters treated him on his return to the country and the experiences of an Egyptian democracy activist who was harassed on his return to Egypt as revealed in a Wikileaks cable.

Both activists were detained and had personal items confiscated by their respective governments' security forces - Appelbaum has had his laptop inspected, receipts copied and mobile phones confiscated on re-entry to the US while the unnamed Egyptian activist had notes and diary entries confiscated when he returned to Egypt after attending discussions in the US.

Appelbaum was also named in a subpoena of his Twitter use by the US Government seeking information to use in its case against Wikileaks, revealed when the social networking service Twitter refused to hand over such information without first alerting its users to US Government demands.

The protests to unseat Egyptian president Hosni Mubarak that began on January 25 led to that country's government to shutter most internet traffic. Protesters were using social media services such as Facebook to coordinate actions.

Network monitoring companies reported that soon afterwards, much of Egypt's public internet network was unreachable from outside the country.

Theories of how to take a country off the internet have circulated for at least 10 years although this is one of the most complete examples of such a denial of service perpetrated by a government against their people raising the spectre that other countries may initiate similar actions in future to quell dissent.

For instance, even as the US Government condemned the Egyptian Government's crackdown, US senator Jay Rockefeller was preparing a presidential "internet kill switch" in a bill to be debated this week.

Despite his run-ins with US security services, Appelbaum was supportive of the Egyptian protesters who have received help and public backing from the US Government.

"The Egyptian Government is murdering unarmed civilians who wish to peacefully protest the way that their lives are governed," Appelbaum later told SC Magazine.

"Probably Tor plays only a small part for only a few thousand people. I'd like to think it's an important part and hopefully they will use it to stay safe against this violent tyranny."