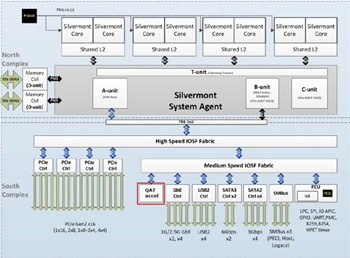 Atom C2000s won't rock around the clock, thanks to failure time-bomb.

A serious flaw with Intel's Atom C2000 product family can cause processors to fail completely, rendering the devices they power inoperable after just 18 months of operation.

Kit vendor Cisco has issued an advisory for the problem, noting the failures start appearing after a unit has been in use for around 18 months.

Once the processor fails, "the system will stop functioning, will not boot, and is not recoverable".

Cisco optical networking, routing, security, and switching gear - including the ASA and ISA3000 family - are affected.

In its C2000 product family specification document [pdf], Intel states that the LPC clock outputs could stop working. If that happens, systems with the faulty processors will no longer be able to boot up.

The LPC bus was introduced by Intel in 2002. It is four bits wide, runs at 33MHz, and connects relatively low speed parts of computer systems such as boot read only memory, and older devices such PS/2 keyboards and mice, to the processor.

Swan did not say how many processor failures Intel has recorded and how much rectifying the issue will cost the company, but admitted it would weigh on Intel's data centre group margins this year.

He said Intel has the problem "relatively well-bounded with a minor design fix that we're working with our clients to resolve".

The Atom C2000 chip is used in products from several other large hardware makers, including Dell, HP, NEC, Qanta, Supermicro, and Synology, but only Cisco so far is warning customers about the potential of processor failure.

Update 9/2: NAS and router vendor Synology confirmed it had been notified by Intel about the processor failure issue.

There is an “increased degradation chance of a specific component after heavy, prolonged usage”, a Synology spokesperson told iTnews.

Nevertheless the company said it was safe to continue to use its devices.

Synology said it hadn't seen any indication that the issue has caused an increase in failure rates for DiskStation or RackStation models equipped with Intel Atom C2000 series processors, compared to other models manufactured in the same time frame not equipped with the affected processors.

The vendor declined to say if it will swap out affected processors in its products. Users who encounter any issues should contact Synology support.