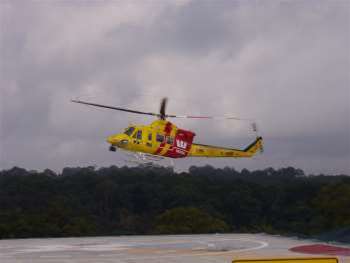 The Australian Transport Safety Bureau is investigating a narrowly avoided collision on Saturday night between a Westpac Rescue chopper and an unmanned aerial vehicle.

One of two Bell 412 choppers the Westpac Rescue Helicopter Service operates was involved in a near miss with the UAV near its Newcastle base in NSW on March 22 at about 10pm.

During the flight, according to the ATSB’s open investigation, the chopper’s crew spotted a UAV at about 1000 feet above ground level, which then turned and tracked towards the helicopter.

The crew were then forced to take “evasive action” to avoid a collision, the ATSB said. No-one was injured in the incident.

The UAV was well above its maximum allowed altitude - drone pilots need approval to operate above 400 feet.

The agency is conducting interviews with the helicopter’s crew and gathering additional information as part of its investigation, and will release a report by June.

The Westpac Rescue Helicopter Service has been operating as a 24/7 rescue team since 1981. It currently operates four aircraft - two of which are Bell 412s, as well as two BK117 choppers. All are twin-engine and single pilot machines.

The service works in unison with NSW emergency services agencies and runs out of two bases in Tamworth and Broadmeadow in Newcastle.