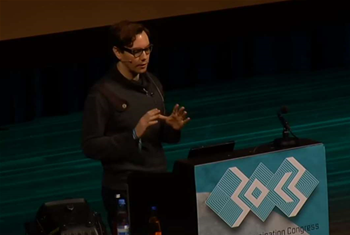 Applebaum revealed numerous leaked NSA-branded slides detailing the agency's armoury of exploits -  most of which are yet to be published by any news outlet, providing fleeting glimpses of the headlines SC readers should expect to see over the coming weeks.

“F### them for collaborating, and for leaving us vulnerable,” he said.

Indeed, Applebaum referred to the work of Kartsen Nohl, a German security researcher who in 2010 boasted at the same conference that SIM card encryption could be hacked, and returned in July 2013 at the Black Hat conference to prove beyond doubt that SIM cards could be compromised.

“The NSA says that nobody will come to harm” from its computerised spying programs, Applebaum said, as the hacking tools it has created “will never be used by a third party”.

The fact that Nohl’s team at Security Research Labs used some of the same techniques as the NSA to gain access to SIM cards proved “how wrong the NSA is on this," he said.

The danger for users, Applebaum reasoned, was that “for every Karsten there are hundreds of people paid to do this full-time who never tell anybody”, referring to criminal hackers that break into networks for financial gain.