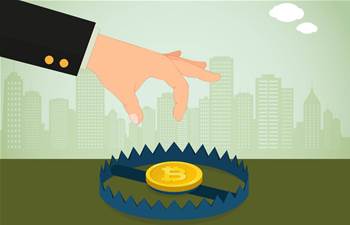 Not confident to offer them banking services.

NAB and Westpac have rejected claims they are hindering competition in the Australian finance landscape by declining banking opportunities with cryptocurrency businesses, putting their hesitancy down to the need to manage risk.

Both banks fronted a parliamentary committee late last week to answer questions on various practices including the decision to ‘debank’ or refuse banking services to cryptocurrency businesses.

The pair said digital currencies posed significant risks due to the uncertainly surrounding the technology, leaving them with no choice but to opt-out of dealing with such businesses.

“One of the things that underlines a bank is we have to manage risk. That's what we do all day every day,” McEwan said.

McEwan described the bank's relationship with the cryptocurrency sector as an “emerging issue”, and said it was still unsure where digital currencies fitted in the financial landscape.

“We'd have to look at where does cryptocurrency go along with a number of parties like the Reserve Bank and regulators,” he said.

“We need a seriously good look at what is the role, if there is a role for cryptocurrency, or any other form of money movement.”

McEwan added that dealing with cryptocurrency businesses “is fine until it goes wrong”.

“I'm worried about understanding [what cryptocurrency] is and [what] are the true ramifications long term and if we can get it safely [to the] customer we may or may not trade cryptocurrencies,” he said.

NAB is currently reviewing the broader application of cryptocurrency and is studying how customer preferences are evolving before fully developing its own strategy.

Westpac CEO Peter King said that “in relation to cryptocurrency, [the bank] can't get itself comfortable because it's anonymous money and therefore we can't meet the regulations”.

“We've looked at the requirements and what we would need to do and the cost of getting it wrong versus the return we get for it, and haven't got ourselves there on the risk-reward equation,” he said.

At present cryptocurrencies fail to meeting the bank's anti-money laundering and counter-terrorism requirements, adding digital currencies have “features that are hard, and we haven't found a way through that yet.”

Westpac has already ‘debanked’ eight fintechs in the past year deeming them too high a risk to continue business with.

NAB chose not to disclose how many fintechs it no longer provides services to to the committee, stating the bank’s “decisions to exit the banking relationship with a fintech are informed by NAB's risk appetite.”

‘Mining’ is the process of creating new cryptocurrency for circulation and requires a vast amount of energy.