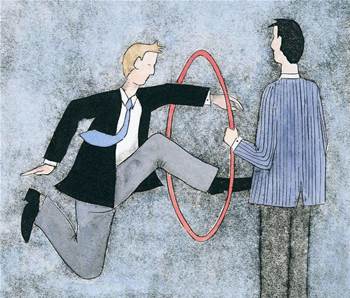 But education should take back seat to product safety.

Australia's leading criminologist thinks online scams have escalated to such a point that first-time users of computers should have to earn a licence to surf the web.

Russel Smith, principal criminologist at the Australian Institute of Criminology said the concept of a "computer drivers licence" should be taken seriously as an option for combating internet-related crime.

"There's been some discussion in Europe about the use of what's called a computer drivers licence -  where you have a standard set of skills people should learn before they start using computers," Dr Smith told iTnews.

"At the moment we have drivers licences for cars, and cars are very dangerous machines. Computers are also quite dangerous in the way that they can make people vulnerable to fraud.

"In the future we might want to think about whether it's necessary there be some sort of compulsory education of people before they start using computers," he said.

The Australian Computer Society launched computer driver's licences in 1999. It aimed to give users a basic level of competency before they started using PCs. But the growth in cybercrime has led to IT security experts such as Eugene Kaspersky to call for more formalised recognition of a user's identity so they can travel the net safely.

He said that education was secondary to better technology solutions.

"I think at the starting point of it you need manufacturers of both hardware and software to devise technology that makes it difficult or impossible for people to be defrauded," Dr Smith said.

"And the main development in that area, I suppose, is the use of biometrics where you have fingerprint scanners or some biometric linked in with the authentication processes on computers".

Dr Smith said that the use of chip and pin credit cards had been a "very effective development" in Europe.

"I think when that happens in Australia we will be much better off," he said.

The banks are "being kind"

Dr Smith also said that Australia's banks were "being kind" when they bore the costs of cyber crime.

"There's a code of conduct for electronic transactions and under that code if people suffer a loss through an electronic transaction and there's no evidence that they've been implicated in anyway, then the banks undertake to compensate that individual," he said. "Some people probably are partially responsible to what happens to them if they've done something very silly or negligent.

"What that really means is that the banks are suffering a loss and eventually that money will be put on the cost of running the banking system. Consumers probably end up paying at the end of the day."