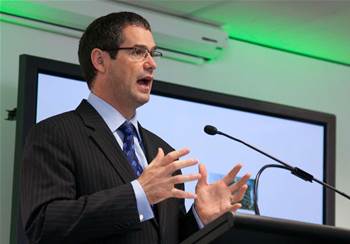 NICTA ships out of the railway sheds.

At the opening ceremony, NICTA's CEO David Skellern told the audience the building was built by the NSW Government to provide research laboratories as well as to house spin-off companies created to market products created by NICTA researchers.

Part of the building would also be used by the Defence Science and Technology Organisation (DSTO).

"Maximum light comes in to the workspaces and all of NICTA's lighting is controlled by motion detectors in each office and meeting room - this ensures lights are only used when needed.

Senator Conroy, who called the new building "stunning", said it was about time NICTA moved out of its old HQ.

"For years we have enjoyed the charm of one of Australia's top innovation bodies living among the relics of the industrial past of Eveleigh railway workshops. It is only fitting that NICTA has high tech premises to match its high end endeavors," Conroy told the audience.

Conroy reiterated that the government had agreed to continue supporting NICTA, with $185m allocated till 2015.

"NICTA plays such a significant role in Australia's innovation system. With this funding certainly I have no doubt NICTA will continue to generate significant economic returns and social returns to the Australian community and attract increasing investment from partners," he said.

Conroy said NICTA was already working on projects that will help the NBN run at maximum capacity and efficiency and expected the organisation to play a key role in commercialising Australian innovation.

"NICTA is already conducting work to help the NBN run at optimum capacity and developing apps that will run over the network in the future.

"It will continue to play its leading role as a key national research body, fostering ICT skills development, supporting industry, and commercialising Australian innovation," he said.