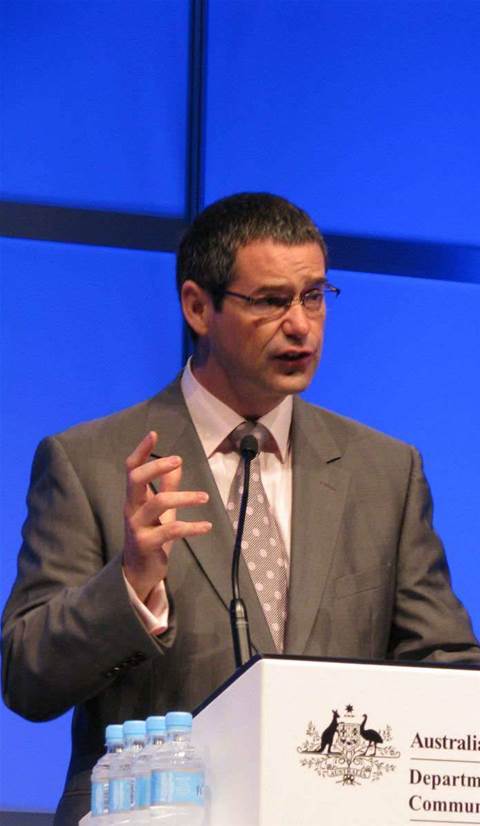 Claims no service providers are offering SMB's services over 24Mbps.

The clauses prohibited a service provider from deploying "superfast" fibre infrastructure - capable of  internet speeds above 24 Mbps - to businesses with under 15 staff, unless wholesale access to the fibre was made available openly and on non-discriminatory terms.

Slattery told the CommsDay summit that such a clause would mean that small businesses could not expect to achieve speeds of over 24 Mbps for several years as they waited for NBN Co to connect their local area.

But Senator Conroy told iTnews today at the Cisco Live! conference that the Government "makes no apologies" for protecting NBN Co from having the most profitable areas of Australia networked with fibre before the national broadband network arrives.

Asked how long small businesses would be required to wait for high speed broadband in the meantime, the Minister said the point was "a nice theoretical" argument that was irrelevant in practice.

"Nobody (amongst telcos) is knocking on the door of that small business market right now," he said - referring to high speed services above the 24 Mbps threshold offered by ADSL2+.

Slattery had slammed the clauses which he said prevented NextDC - which had 14 employees - from running fibre links interconnecting the company's data centres and head office.

He said that Australia's small businesses without an existing fibre connection were now "legislatively isolated" to run on ADSL.

"When are you going to give me fibre under the NBN? Can you guarantee that I'm going to get fibre next year? Within five years? Before 2020?" Slattery had quizzed a government official in the summit audience without eliciting a response.

"Most small businesses won't have a chance in hell of getting a [fibre] service until at least 2016. That is unacceptable. That is stranding the biggest growth engine in our nation."

Senator Conroy also expressed disappointment that Internode chief Simon Hackett had criticised the points-of-interconnect plan agreed upon by the Government and competition regulator the ACCC, asking why Hackett or Internode had not earlier submitted a submission to the competition watchdog's inquiry into the matter.

The Minister said he expected dissatisfaction with the NBN plan to wind down once more Australians saw applications in action.

He said Sydney was a particularly challenging area to sell the NBN vision, predominantly due to the attacks of "shock jock" radio kings Alan Jones, Ray Hadley, Chris Smith and Michael Smith. He said his office has counted 158 occasions in which one of the four have attacked the NBN plan over a 40 working day period.