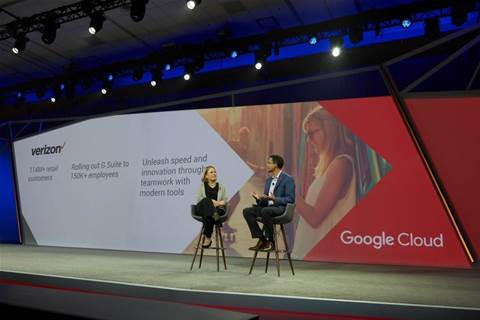 Colgate-Palmolive has shifted 28,000 users onto Google’s G Suite apps for business platform and off IBM’s Lotus Notes and Domino, while US telco Verizon is preparing to do the same for 150,000 users imminently.

At Google’s Cloud Next conference in San Francisco today, both companies detailed their journeys so far with the productivity software suite, which was rebranded from Apps for Work to G Suite last September.

For Colgate-Palmolive, the project started last May when it announced to its staff that it was “going Google”.

It launched the software suite to its global IT organisation three months later. This initial rollout taught it the importance of G Suite evangelists within the business to help with change management.

“We recruited a few thousand volunteers as early adopters, and had about 900 ‘Google guides’ to be trainers on the ground,” chief information officer Mike Crowe told the conference.

That approach set the company up "nicely” for one weekend in November, when Colgate-Palmolive moved 20,000 out of its 38,000-strong workforce onto the platform. It now counts around 28,000 users on G Suite.

Crowe said he had been somewhat surprised by how Colgate-Palmolive employees were using the technology.

“Everybody is using email and calendar. But usage of other tools is impressive: 90 percent of users are active on Google Drive, and February alone had more than 57,000 hours of Google Hangouts,” he said.

“We’re seeing faster uptake in productivity tools like Docs and Sheets and Slides than I had expected.”

Verizon counts down days to shift

US telco Verizon, meanwhile, is just at the very start of its G Suite project, preparing to move 150,000 workers to the platform next week.

It will be the culmination of a year-long “challenging” effort to transform the telco’s workplace productivity. It is understood the telco is similarly moving off Lotus Notes.

“[One year ago] we formed a group focused on raising the bar in productivity through collaboration and employee engagement. We rolled out activity-based workplaces, unified communications globally, and improved our mobile options,” CTO of digital workplace Alin D’Silva said.

“But we realised we were missing some key features like real-time collaboration. So we did a comprehensive trial of G Suite and our employees love it.”

Making the product more attractive was the fact that two of Verizon’s subsidiaries, AOL and Telogis, were already on it. A further driver was a desire to deploy the types of technologies new talent coming into the company would expect, D’Silva said.

However, Verizon encountered a “fair amount of resistance” to its plans.

The company’s management was comfortable with its decision having “got deep” on issues of security, operations, user experience, compliance, and return on investment with Google, but others within the wider business still weren’t convinced.

The reception to the plan - detailed in an intranet article in January - was “pretty interesting”, D’Silva said. Within days the article generated “hundreds” of comments and questions, not all positive.

“Folks who had used G Suite in their personal lives were really comfortable. And then there were a number who were concerned about how it was going to change their jobs, they were used to doing things in a certain way,” D’Silva said.

To address these concerns, Verizon - like Colgate - turned several enthusiasts into 'Google guides’ to help with the change management efforts.

“[We learned] that you have to bring along all the stakeholders that are key in decision-making, like the CISO and legal teams, because they have to go on this journey with everyone. They have to understand what it’s going to take and be comfortable with that,” D’Silva said.

“This is partly a technology transformation but it’s really about driving change in the organisation. You really have to give thought to how you have to drive change management. If your mission is to transform the company, you have to have meaningful change, otherwise where’s the transformation?”

Allie Coyne travelled to Google Cloud Next as a guest of Google.