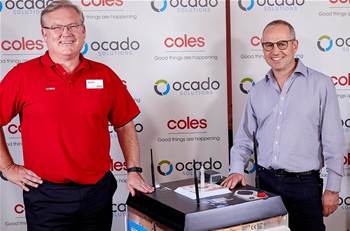 Coles Group has unveiled plans to stand up a new online grocery business by 2023, including automated fulfilment of online orders and intelligent "last-mile routing" to speed up delivery.

The supermarket giant said that the underpinning technology would come from British online supermarket Ocado through an exclusive deal.

It plans to set up "state-of-the-art automated customer fulfilment centres" in Sydney and Melbourne.

An army of over 1000 bots developed by Ocado will staff each fulfilment centre.

Customers outside of the Sydney and Melbourne metropolitan areas will be able to order from the Ocado-based website, but their orders will still be fulfilled by the supermarket closest to them.

Within the metro areas, the deal with Ocado is expected to double Coles’ home delivery capacity through faster, more accurate order packing in the fulfilment centres, while also optimising the delivery routes, increasing the number of delivery windows and revamping the ordering website.

Coles chief executive Steven Cain told an analyst briefing that it would pay Ocado between $130 million and $150 million over four years, covering installation, maintenance and software licensing up until the 2023 launch.

Cain said the relationship between the two companies, however, has no end date and they will continue to work together past the launch phase.

Both of the automated fulfilment centres are predicted to have a sales capacity between $500 million and $750 million per annum, reducing the dilutive effect of home delivery on Coles’ profit margins.

Coles is planning for around 1300 dedicated software engineers to maintain and enhance the customer experience of the new online grocery platform.

Despite the significant investment in IT staff required, Cain said that partnering with Ocado still worked out to be good value for money for Coles.

"This is far and away the world’s best technology and the only end-to-end solution that’s available," he said.

"I think if we’d wanted to make significant inroads on what we’re doing today [in the home delivery space], it would’ve meant at the current time doing it ourselves and cobbling various websites and technologies together.

“Ocado have spent 19 years and many many millions of pounds getting to where they are today, and there’s no guarantee that if you did it yourself you’d end up with anything better than what we’re doing," Cain said.

Cain highlighted the possibility for future expansion outside of Melbourne and Sydney, saying that Queensland would be the next logical market in which to launch new automated fulfilment centre.

He added that other methods of order fulfilment are still being examined, including ‘dark stores’ with no retail shopfront. It has been trialling this in Melbourne since mid-2016.