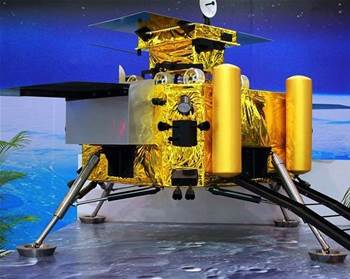 China has scheduled its first ever moon landing mission to take place in December this year, after the carrier rocket for the Chang'e-3 lunar probe successfully passed pre-launch testing, the country's State Administrationf for science, technology and industry for national defence announced.

The Chang'e-3 mission follows China's Chang'e-1 and Chang'e-2 programs, which plotted a high-resolution map of the moon.

If it succeeds, it will be the first space craft to land on the moon since the Soviet Luna 24 mission in 1976.

Chang'e-3 is named after the goddess of the moon in Chinese mythology and will take soil samples and also investigate the lunar crust to a depth of hundreds of metres.

The lunar module is set up as an astronomical observatory which will take high-resolution imagery of the Earth and other planets and objects in the solar system during a three-month mission.

With seven instruments and cameras, including an extreme ultraviolet one to measure the effects of solar activity on the earth's ion layer, Chang'e-3 weighs 1200 kg and is powered by solar panels and plutonium radioisotope thermoelectric generator.

It features a six-wheeled lunar rover for exploration of the moon's surface. The rover weighs 120 kg and has a 20 kg payload that includes a ground radar, alpha particle x-ray and infrared spectrometers.

The Chinese are working with overseas partners for the lunar mission, such as the Hawaii-based International Lunar Observatory Association (ILOA) which said last year it will use the telescope on Chang'e-3 for galactical and astronomical imaging.

Chang'e-3 will take off from the Xichiang satellite launch centre in southwest China.