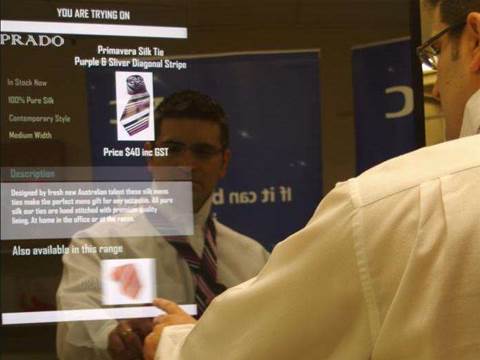 NEC Australia has developed an innovative 'magic mirror' prototype that can display information relating to garments as people try them on in-store.

The EPCmagic mirror unit consists of an LCD screen and RFID reader that sits behind a custom piece of ‘semi-transparent’ glass imported from Germany.

The glass is said to enable light to pass through the mirror’s reflective coat and is only currently being produced by a single manufacturer.

“It’s not the full brightness of a mirror -- it’s a bit duller than a standard mirror but still [roughly] the same,” said Davide Iacovitti, product manager of applications and content at NEC Australia.

The backend runs on digital signage and RFID middleware developed and integrated by R&D staff at NEC in Melbourne.

The system works with RFID sticker tags, which are attached to either the paper swing price tag or the label sewn into the actual garment.

When a person tries the garment on and looks in the ‘mirror’, the RFID tag is scanned and information about the piece, such as its designer, available sizes and colours, is displayed on the LCD screen situated under the glass. The customer can still see their reflection despite the screen display.

The range of the RFID reader is anywhere from 30 centimetres to three metres, and can be adjusted.

NEC launched the prototype mirror with GS1 Australia at the Impetus 2008 supply chain conference in Melbourne this week.

“We’ve had a couple of very large retailers play with it at the conference, and they were quite excited and interested in the product,” said Iacovitti.

Iacovitti said if commercialised, the solution would likely be offered to retailers as a ‘managed service’. Indicative pricing is around $250 per mirror per month, he said.

“With retail spending declining it could be a trigger to get people into the store,” said Iacovitti.

“I think flagship retail stores might be a good target initially but its use is by no means limited to boutique installations.”

Iacovitti said the system could also function as an interactive kiosk – for example, a customer could scan a CD for the price, and the screen could also play the music video of the song to create a more interactive experience.

NEC may also look to introduce touch-screen capabilities or the ability for customers to get the next size of a garment they try on without ever leaving the changeroom. These were just two pieces of feedback generated from the launch.

“At the end of the day it’s not about replacing any staff in retail but creating a complimentary facility to improve sales,” added Iacovitti.

The system is intended to demonstrate a customer-facing benefit of using RFID in retail environments, therefore increasing return-on-investment by providing new uses on top of traditional inventory management and supply chain uses.
Got a news tip for our journalists? Share it with us anonymously here.