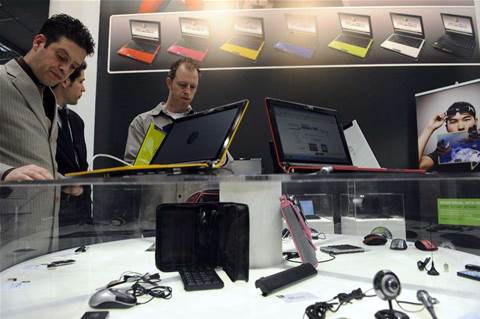 Several exhibitors have complained their wares have been nicked by nimble hands this week, with A-Data getting particularly badly burned.

The Taiwanese memory module maker had large capacity SSDs swiped from right under their noses, and from behind a sheet of protective glass, not just once, but twice, according to an A-Data staffer.

"We didn't expect someone could steal an SSD, especially since it's under a [glass] case", said a shocked Iwi Lin after he discovered the thievery after the booth's display screens went blank.

"I went to check the SSD and it was gone" he said.

The first SSD was a 192 GB offering with a street value of around US$500.The firm replaced the stolen drive with a 128 GB SSD (with a value of US$300), only to have that pilfered the following day too.

"Mostly we just use dummies" explained Lin, adding "but for a live demo you need a real one".

A couple of booths down from A-Data, Kingmax was also targeted by thieves, but luckily for the firm, the dozens of Micro SD cards snatched from its display really were duds.

Got a news tip for our journalists? Share it with us anonymously here.
theinquirer.net (c) 2010 Incisive Media
Tags:
adata cebit hardware kingmax thieves