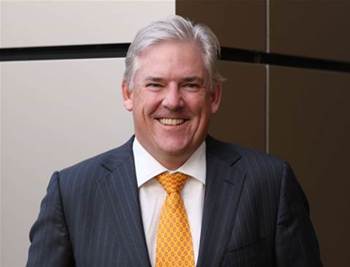 Whiteing commences his new gig effective from today, with Standard Chartered announcing the high profile hire over the weekend.

It described Whiteing’s job as “a newly expanded role that brings together the chief operating officer’s (COO) team with the bank’s global and country operations teams that formerly sat within information technology operations.”

According to the announcement, Standard Chartered’s current group CIO, Michael Gorriz, will remain in his role “to lead the group’s digital transformation and innovation programmes”, leaving the operations division to run day-to-day IT.

The amalgamation of so-called business-as-usual IT with core operations, while breaking out innovation and new development as a separate spearhead, is a broad trend across institutions as they try to make new technology products and services a key competitive advantage.

“Bringing David on board with a mandate to improve efficiency and deliver better experiences for our clients also gives Michael’s team more space to relentlessly pursue our tech and innovation agenda.”

While Whiteing will report directly to Winters, what happens to the bank’s previous COO Doris Honold is less clear, although it appears she is staying with the bank.

Standard Chartered said Honold “will work with David and Michael Gorriz to effect the separation of operations from technology and the integration with our existing COO function.

“She will remain as part of the management team. Her next role will be announced in due course.”

Whiteing replaced the CBA’s high-profile CIO and group executive Michael Harte in June 2014 but subsequently left the bank after a senior executive spill and restructure following a raft of regulatory run-ins that ultimately led to then CEO Ian Narev falling on his sword.

One of the most costly scandals to hit the bank was the intelligent deposit machines (IDM) debacle that resulted in the CBA being hit with fines of $700 million by regulator and financial intelligence agency AUSTRAC over AML/CTF (anti-money laundering / counter terrorism financing) notification breaches.

The breaches related to systems failures within the CBA that resulted in regulators not receiving automatic pings from the bank for cash transaction thresholds and suspicious activity.

AUSTRAC successfully argued CBA did not sufficiently assess the money laundering and terrorism financing risk of the IDMs before they were switched on in 2012, and only conducted an assessment three years later.

The scale of the fines stemmed from the fact the IDMs were technically capable of making the notifications, however providing the information to regulators clearly fell down the order of priorities for the CBA’s executive committee and governance team.

The size of the fine went on to conspicuously dent CBA's last profit.

Last week the CBA confirmed its IT security chief Yuval Illuz had left the institution after just a year-and-a-half in the role.

Illuz has been replaced in the interim by CBA’s executive general manager of digital Pete Steel, who will assume the CISO role in addition to his digital duties.