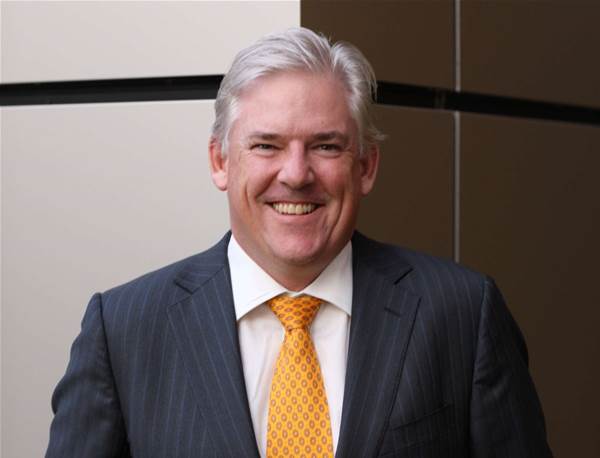 If you ask David Whiteing, there is nothing digitally disrupting the financial services industry.

A former IT consultant with the likes of Accenture and McKinsey, Whiteing doesn’t like the term, nor the concept that his business might be being shaken up.

So what about the proliferation of mobile devices, the consumerisation of technology, Bitcoin and other payment protocols, or cloud computing?

“I don’t see it as something we have to react to, I see it as a part of business. That’s the way we go to market.

“Our view is ten years from now, mobile devices will be the major form factor in pretty much everything people do, not just banking. So the question we’ve got is how do we integrate that in a broader sense beyond just the banking services, and actually think about this in terms of a total end-to-end customer service?”

Whiteing says he is yet to see a fundamentally disruptive business model - which he categorises as something that has never existed before - enter the financial services industry.

He references Google’s development of a new search paradigm and Amazon’s creation of a radically different platform for retailing as two examples that qualify for the disruptive label.

But the “trends” that are currently being bandied about as disruptive to the financial services industry - like Bitcoin and the rapid rise of mobile devices - are merely “innovation”.

“Really disruptive models are much more difficult to pick, and I don’t see many at this stage.”

CBA’s goal is not to try and predict every new trend, but rather set itself up in a way that enables it to respond quickly and with ease to the latest innovation.

“This digital disruption that a lot of people feel is threatening and challenging, for us is just another consideration we take into account in planning how we respond,” he says.

“[Innovation] is actually driven more by business decisions than it is a massively challenging thing we have to create a program of work to do.

“I think if you retain that mindset, then the danger is you’re already a long way behind.”

He does, however, see a lot of potential in digital currencies like Bitcoin.

While Whiteing considers the currency aspect of Bitcoin a “business decision” and driven by regulatory requirements, the protocol behind it is “absolutely interesting” - but he’s quick to call it a “technology evolution” rather than digital disruption.

“The protocol is an evolution, it’s an innovation. Payments protocols are over 40 years old. But Bitcoin through the distributed ledger using public and private keys has created a protocol that allows you to transmit and receive information in a much more secure way,” he said.

“That’s just a newer, modern way of thinking about those protocols; breaking them down and reinventing them.”

The bank has played around with other payment protocols in the market, and plans to use Ripple to transact between its subsidiaries. It’s also considering trying some out with its customers to test the waters.

“It’s definitely going to play, and the great thing about it is the various protocols that are appearing - Bitcoin is by no means the only one - they’re just good technology. It’s a very cool space, and one that I see is imperative for us to be playing in.”

Too close for comfort

Under former CIO Michael Harte, technology became a core strategic priority and the bank introduced a new-found focus on the customer at the centre of all its operations.

This has meant CBA has comfortably retained the crown of chief innovator and tech leader within Australia’s big four banks for a number of years now.

But while NAB and ANZ have become somewhat waylaid with their own transformational efforts, CBA’s main technology rival Westpac has now mostly completed its efforts to tackle the front-end first and is now focusing on sorting out its backend.

The bank has just started work on a long-awaited upgrade to the latest version of its CSC core banking platform, Celeriti, which will also inform how it tackles a planned “customer service hub” - a master database of sorts set to serve as the single point of data on every customer.

It means Westpac is now nipping uncomfortably at CBA’s heels: the near identical announcements of a cardless cash feature last year, and last month’s boasting of Apple Watch apps within days of each other demonstrate the growing rivalry.

But Whiteing appears almost disinterested in what appears to be a slowly closing gap.

“Every business has their own context, and you make your choices based on the context you’re in,” he says.

“We had a requirement to do a core replacement many years ago for a multitude of reasons - that context was applicable then, we did the work we needed to do then aggressively amortised, and now we continue to invest more in technology than anyone else in the marketplace.

“We hold the lowest amortised software position on our balance sheet. And we’re financially performing as well. That’s a great position to be in.

“The rest is interesting, but not relevant to us."

He does, however, worry when people begin to talk about "silver bullets” in terms of tech overhauls.

“The reality is it’s a composite of things that you need to do,” he says.

“The real skill in driving and defining leadership is to be across all of those qualities so no one part of your architecture becomes too disconnected or too far away from another part, because at some point it’ll catch up with you.”

It’s all about the culture

Where Harte’s tenure could be characterised by the big-bang core systems overhaul, Whiteing’s focus is centred on fostering the right internal skills and culture.

It serves as an example of two starkly different approaches: while Harte happily served as Australia’s rock-star banking CIO, with Whiteing you sense he’d much rather be in the trenches getting stuff done than having to sit through media interviews.

His view is that it’s collaboration and skills that will allow a business to succeed - not the technology choices it makes.

“The technology part is relatively solvable - what’s much more relevant is have we massively simplified and sanitised our business and everything that sits around that?” he asks.

“Have we really challenged ourselves to evolve and develop the human capability? Have we got the right people with the right skills so the people in the business and the technology function have the right ways of working together? Are we working with the right cadence, are we constantly evolving and updating the skills we’ve got?

“Are we making sure that as we recruit people we bring in those with the right skills beyond just functional or aptitude, people that have much harder to measure skills - ability to problem solve, resilience, ability to work in a muche more collaborative, agile way?

Whiteing cites Google as one example of how success can be achieved by taking a longer-term view.

“Very early on I remember seeing an interview with what would have been the equivalent to a head of HR describing how they made choices, and the question they would ask is ‘will this work when we are 10,000, 20,000 people?’ They were a 400 person business at that time,” he says.

“But they were taking a long-term view, thinking 10, 20 years ahead and making choices with that lifecycle - that’s a big opportunity for a business like ours.

“The more we can pivot away from a short-term, project-oriented perspective and to a longer-term, outcomes-based perspective the more successful we’ll be.

“Over the long cycle we’ll outperform because we’ll be more effective and more efficient in the way we spend our money. We’ll have been able to deliver more for the same dollars, and we’ll have created a much better customer experience.”

While soft skills weigh heavily in Whiteing’s criteria for an ideal worker, he’s quick to not discount deep technical skills.

“I want you to be a deeply skilled software engineer or infrastructure engineer or UX designer, but I also want you to have the ability to problem solve, work collaboratively, work in a dynamic and fast environment, in cross-functional teams, and understand that when a risk person is pushing something they are doing so with a reason,” he says.

“The combination of those skills and deeper domain skills are the winning combination. Too often technology problems and badly-run projects come about because those skills weren’t there in a composite way at the requisite level.”

His focus for the next five-odd years - he won’t put a timeline on it because “there’s always work to be done” - is to make sure every staff member in the IT shop is in exactly the right function to suit their skills.

It will mean reallocating workers, reskilling staff, and letting some go in order to create teams that operate to the highest level. At least a quarter of Whiteing’s time is spent on talent, he says.

“Everyone comes to work every day trying to do the best they can. And if they’re not able to do that, then that’s a failure of leadership,” he says.

“Leaders need to understand what their team is able to do and where the gaps are, and either helping people to make the transition or recruiting the right people to fill that gap.

Whiteing believes CBA can retain its leading innovator position by organising staff correctly - allowing the business to operate at its full potential and deliver those innovative solutions it needs to stay ahead in the cut-throat financial services game.

“We create a team of people that are very expert in a particular domain, and them make sure there’s a constant flow of work around that domain,” he says.

“That gets the team much, much closer to the customer, and allows them to drive that standardisation and simplification activity, and in a lot of cases what we’re finding is those people are actually at the forefront of business innovation because they really understand the [technology] solution we’ve got and what it’s capable of doing.”