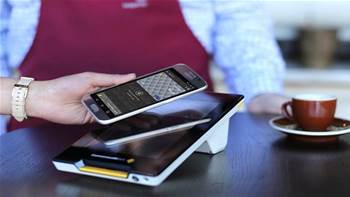 The Commonwealth Bank of Australia has declared a 35 percent surge in smartphone and non-plastic card tap payments in Australia, a jump the bank is betting will lead to richer and more lucrative.

Australia’s largest institution on Monday said that device-based payments using its CommBank app totalled 16.5 million in the six months to June 2018, a rise that was led by phone payments made at supermarkets (20 percent) and petrol and convenience retailers (10 percent each).

It’s a trend that has the CBA and its card issuing rivals locked in an apps arms race to win over customers based on the convenience of phone and Fitbit payments using mobile wallets that give customers and merchants much finer data about purchases.

However, the CBA isn’t giving out either the transactional dollar value of the device payments, nor the total volume of tap (NFC) payments made on its network.

The take-up of tap-and-go payments has generally displaced payments made using card insertion for over the counter payments, with industry consensus now putting NFC-based at around at least 90 percent of so-called card present transactional volume.

The opacity of the payments mix and volume – that is, debit versus credit transactions made on mastercard and Visa products – is a growing concern among regulators because it makes it more difficult to assess the amount of fraud hitting people’s bank accounts as opposed to being spotted before 50-day credit card bills roll.

What is known is that the shift over the last 5 years has been so huge that it left both supermarkets and regulators concerned about the dominance of global payment schemes (mastercard and Visa) in the mix of transactions.

Importantly, consumers now routinely tap to pay over the $100 PIN number requirement threshold, a habit certain to be irking major supermarkets Woolworths and Coles who remain key stakeholders in the eftpos payments network.

The role of what are known as ‘strategic merchants’ –essentially Coles and Woolies – in the payments mix is pivotal because the sheer volume of money that passes through their tills can influence how profitable certain types of cards are, especially if retailers steer consumers towards a certain kind of card.

Although big supermarkets attract much lower card processing fees because of their bulk, the fact that the vast majority of tap payments travel down the rails of schemes mastercard and Visa – irrespective of whether they are credit or debit payments – is a goldmine for issuers and schemes.

The wider concern for regulators, especially the Reserve Bank of Australia, is that the behavioural default to tap means cheaper domestic schemes like eftpos has been historically neglected by its banking stakeholders in terms of innovations like tap and online payments.

In 2010 Woolworths temporarily turned-off scheme debit acceptance at its supermarkets as part of a pushback against the dominance of Visa and mastercard.

Since then regulators have imposed low-cost routing on the payments industry, rules that mean merchants get to choose which rails payments run on rather than banks and schemes.

While NFC originally started as a mechanism to increase the convenience of credit cards, the near saturation of those cardholders means that banks are now turning to debit payments as the next NFC battleground, especially on devices.

“Since 2013 our customers have been able to use their smartphones to make payments. By extending the suite of CBA supported digital wallets to our Visa cardholders we’re providing our customers with even more options to make a payment at the point of sale, whether that be through the CommBank app or their smartwatch,” CBA’s acting executive general manager for everyday banking, Michael Baumann, said.

“We’re seeing customers who are stretched for time taking advantage of the ease and convenience of digital payments. Our data has revealed that groceries, food and beverages and petrol are the most commonly purchased goods.”

The extension of the mobile wallet facility to CBA Visa customers is certain to turn heads at mastercard, which has traditionally put more energy into more profitable credit-based products, while Visa has put significant resources to maintaining issuance volume in the bigger but lower margin debit product market.

Visa’s head of product for Australia, Axel Boye-Moller, is pushing the enhanced customer control angle for mobile wallets in the latest CBA tie up.

“Each time a payment is made, these devices can deliver instant alerts and enable customers to manage their accounts while on the go. This is a great example of enhancing the customer experience by increasing both ease of use and control.”