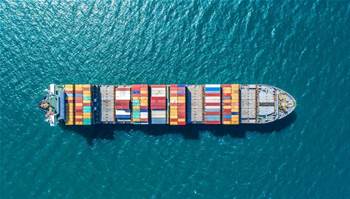 The Commonwealth Bank’s latest experiment with internet of things (IoT) and blockchain technologies has resulted in the successful shipment of 17 tonnes of almonds from Victoria to Germany.

The experiment digitised three areas of global trade – operations, documentation and finance – by housing the container information, completion of tasks and shipping documents on a purpose-built blockchain.

This is CBA’s second international blockchain-enable shipment, after a trial shipping cotton overseas in collaboration with US bank Wells Fargo in 2016.

Like other financial institutions, CBA is chasing incremental developments around the technology in an effort to ensure it is dealt into any major developments in automated transaction technology rather than being left sitting on the sidelines.

The almond trial used four different IoT devices to monitor the conditions of the nuts as they travelled across the globe, recording data on humidity and temperature inside the shipping containers on a private, Ethereum-based digital ledger.

CBA’s managing director for Industrials and Logistics Chris Scougall said the experiment brought to life the idea of a modern global supply chain that is agile efficient and transparent”.

The bank partnered with Olam Orchards Australia, Pacific National for rail haulage, Patrick Terminals at the Port of Melbourne and shipping carrier OOCL Limited for the project.

Australian-based IoT provider LX Group supplied the sensors, network and software to monitor the shipment on its way from Mildura to Hamburg.

CBA’s partners for the project said the proof of concept could prove to be hugely beneficial to the global trade industry by streamlining supply chain management and introducing an authenticated system for keeping track of key documents.

“We believe that blockchain can help our partners reduce the burden of administration on their businesses and enable them to deliver best-in-class services to their customers,” said Scougall.

Supply chain manager at Olam Richards Emma Roberts said the project showcased new ways to increase efficiencies and transparency in the supply chain, meaning suppliers know their product is still in good condition by the time it reaches its destination.

He added that greater access to information along the entire length of the supply chain will enable the company, which has moved over 145 million tonnes of cargo, to better utilise its assets.

“By bringing together partners from across the end to end supply chain and developing a new platform underpinned by emerging technology, blockchain and IoT, we were able to prove a concept to modernise global trade,” said Alex Toone, managing director of Global Commodities and Trade at CBA.

CBA indicated that as it continues to develop its blockchain platform it could move away from Ethereum.

“Ethereum currently has the most development activity globally, and offers the functionality we require. However other blockchains are developing rapidly and CBA remains open to other options in the future,” the bank said in a statement.

It also said that this experiment left potentially sensitive information visible to all partners in the project to enable better collaboration and increased understanding of the technologies involved.

“In a future commercial environment the access rights may be more restrictive, allowing participants to protect commercially sensitive information and restrict user access to the relevant information only.”