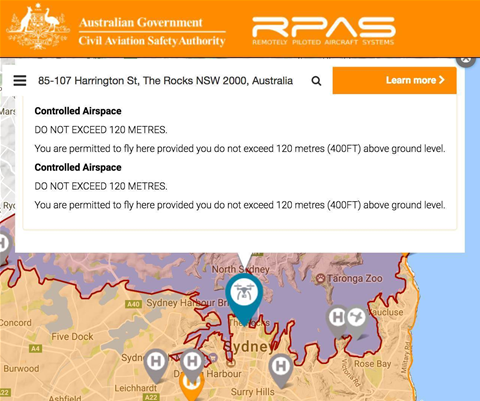 Details where drones can be flown.

The Civil Aviation Safety Authority has released a free app designed to help drone pilots fly their aircraft safely and in compliance with regulations governing unmanned aerial vehicle use in Australia.

CASA teamed up with Australian-US company Drone Complier to develop the Can I Fly There? app, which provides a visual guide of where pilots should not fly.

Drone pilots can see if they're attempting to fly their craft within 5.5 kilometres of restricted airspace, or into the approach and departure paths of non-controlled aerodromes and helicopter landing pads.

Satellite imagery of runway layouts and airport information such as traffic control services are available in the app for the benefit of drone pilots.

The information contained in the app is based on CASA's standard operating conditions for very small commercial drones in the excluded category, and is aimed at both recreational and commercial pilots.

Can I Fly There? is available for Google's Android mobile operating system as well as Apple's iOS, and as a web-based app coded in HTML 5, hosted by Drone Complier.

Data for the maps in the app has been sourced from the country's air navigation services provider Airservices Australia.

Australia is currently trying to work out how remotely piloted aircraft should be governed.

While CASA relaxed some of the existing rules, a senate committee recently expressed concerns around the safety for drone flying and proposed tightened regulations and mandatory registration of aircraft and pilots.