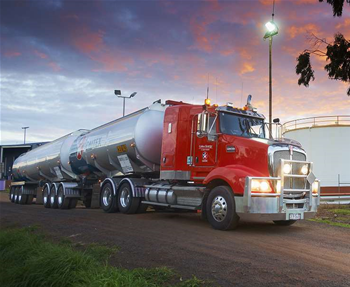 Petrol chain Caltex has identified a new business opportunity in logistics telematics after a successful internal rollout convinced the company to try selling the technology into other transport operations.

Last week the company unveiled Caltex Telematics, a white-labelled platform that taps into a vehicle's engine management system to collect CANbus data and provide real-time information on the performance of drivers and vehicles.

It piloted the solution - which was supplied by Israeli firm Traffilog - on its own fleet before deciding to offer it externally.

The new telematics business unit was spun out earlier this year with three initial staff, who are now in talks with transport companies after having launched their offering at the International Truck, Trailer and Equipment show in Melbourne last week.

The telematics platform goes beyond GPS tracking to tap into the way vehicles are being driven, collecting detail on acceleration and braking, gear changes and how the clutch is used, among other driver behaviours.

As well as improving driver safety, the data is then used to predict faults and maintenance issues before they happen, potentially avoiding expensive late-stage repairs.

Head of the Caltex Telematics business, Ian Moloney, told iTnews the platform went beyond other telematics solutions due to its ability to collect CANbus data from all vehicles.

A controller area network (CAN) bus is the message-based protocol used in vehicles to allow communication between devices without a host computer.

"The data that comes out of any manufacturer's engine is quite unique and specific to a model. What these guys [Traffilog] have is ... a huge library of the CANbus information so it can grab and interpret the information more successfully than any other product."

Drivers can access their own data via a dashboard that tracks their performance alongside others in the fleet, which encourages competition to be the safest, Moloney said.

A company can also use the platform's predictive analytics to work out when a fault might occur.

"In one of our case studies we started getting evidence of quite a serious temperature fault, using all the information from the truck as well as knowledge we have from similar trucks worldwide," Moloney said.

"So then we took the truck off the road and scheduled it for a service. Scheduled repairs are less costly and by doing that we prevented something a lot more damaging for the engine."

Moloney is undeterred by a saturated logistics telematics market and investments the likes of Toll and Linfox have already made into similar technologies.

"We're confident because previous telematics solutions have really concentrated on driver productivity. This has evolved to another level where you're looking at how the driver interacts with the vehicle; driver safety and the health of the vehicle," he said.

"It's not like a normal telematics unit where you put the same box in 50 vehicles and tweak them.

"There's a lot of interest in the market, we're talking to people who have invested in previous systems and who are looking for something that gives them more than what they've got."

Caltex will complete its internal rollout to around 80 trucks within the next four to six weeks, and will make a decision on the final number of trucks to have the platform installed at a later date.

The Australian Logistics Council wants the government to introduce a mandate for telematics technology in all heavy vehicles to improve safety. A decision to act on the calls would create a rich market for Caltex's new telematics endeavour.

The ALC lobbying is in response to tweaks to the Heavy Vehicle National Law that came into effect last month, which allow transport companies to submit data collected from electronic work diaries to the National Heavy Vehicle Regulator from 2017 on.

However, use of the EWDs is not mandatory and transport companies can still submit the required information via paper.

The ALC argues that mandating the use of telematics across industry would improve road safety and provide more accurate data for future government road pricing models.