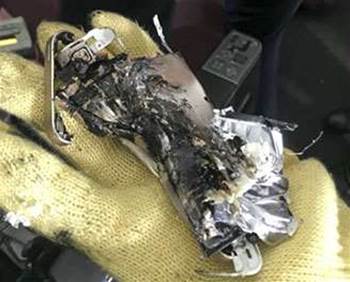 A seat-crushed smartphone from an incident in July. (Credit: ATSB)

The Australian Transport Safety Bureau has warned business class flyers to be more aware of where their smartphones are after two more passengers crushed their devices in their seats mid-flight.

The two fresh instances occurred on October 21, the transport investigator said. On both occasions, the devices were crushed when passengers electronically reclined their seats, forcing cabin crew to quickly immerse the phones in water to put out the fire that had resulted.

The ATSB said one incident occurred on descent into London.

“As the cabin crew was serving the passenger, the seat was moved electronically, crushing the passenger’s smartphone and resulting in the phone emitting smoke,” the ATSB said in a statement.

“The phone had been on charge at the time. Once the charging cable was removed, the smoke started to dissipate. The phone was placed in a metal bin and covered with water.”

Another incident occurred on the same day while a plane was en route to Sydney. The ATSB said the passenger had dropped his phone while sleeping and had asked cabin crew to help locate it.

“The phone was damaged during the retrieval process, and it started to make intermittent bright flashes and a hissing noise,” the ATSB said.

“The crew quickly placed the phone in a steel jug of water with no injury or damage to the aircraft.”

The ATSB did not name the airline involved though it said the “operator is undertaking a range of safety actions to prevent future occurrences.”

“This includes changes to safety briefings reminding passengers not to move their seats when their devices have been lost and to ask a crew member to recover the phone,” the ATSB said.

While noting cabin crew had responded well to the latest incidents, the ATSB said business class passengers should take more care of where they put their devices.

It urged them to keep phones “in an approved stowage, unless in use” and to “locate their phone before moving powered seats”.

“In the event that a passenger cannot locate their phone, they should refrain from moving their seat and immediately contact a cabin crew member,” the ATSB said.