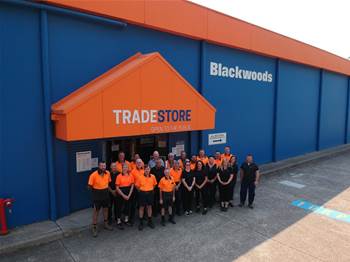 If Bunnings is the dream retail digital transformation, its B2B industrials cousin Blackwoods must surely be the recurring nightmare.

A troubled migration to Microsoft Dynamics from a 30-year-old Focus COBOL-based system has continued to cause acute financial pain for the hardcore hardware shop, with management telling weary investors its performance will remain stuck until the system goes live.

The Wesfarmers-owned industrial parts and equipment distributor on Wednesday bowled-up another set of gloomy numbers, with the frustrated Dynamics rollout cited as a significant contributor to a 50 percent earnings slump across its Industrials and Safety division for the half year ended 31 December.

To put that in context, Wesfarmers’ Industrial and Safety reported earnings before interest and tax of $10 million for the half year ended 31 December, inclusive of a $15 million payroll remediation hit.

That number came off revenues $858 million for the period.

Wesfarmers warned investors last August there was more financial pain to come from the Dynamics rollout. And it’s been delivered in spades.

“The performance of Industrial and Safety business was disappointing, principally due to continued underperformance of Blackwoods,” Wesfarmers said in its results, citing lower sales and the “ongoing investment in customer service, ERP and improving the digital offer.”

Pushed by analysts on progress with the ERP, Wesfarmers’ Industrials and Safety division chief David Baxby said “the ERP system is primarily a cost issue.”

“While you're going through a process like this you've got to have an element of manual handling, to ensure that you can retain those high [customer] service levels of 95 percent plus.

Blackwoods will persevere with the Dynamics rollout – there is no suggestion it could be dumped – but will have to continue to use manual workarounds until it comes good.

Baxby did not say how many people were now working on the ERP project, but at the previous earnings call some 90 people were dedicated to it with a timeframe of around 12 months to completion indicated last August.

The major issue Blackwoods is dealing with is that as Australia’s biggest supplier and distributor of industrial products, tools and commodities, its mammoth catalogue runs to wincing 200,000 SKUs.

The scale of the transition from green screen is such that Blackwoods allocated 18 months to plan the migration now causing it such acute pain.

Last earnings call the company revealed it had implanted a new web front end as well as 32 Cohesio robots to trawl 1350 racks and 86k product locations across six distribution centres.

“We will continue to accelerate plans to address the unsatisfactory performance in Industrial and Safety,” said Wesfarmers CEO Rob Scott.