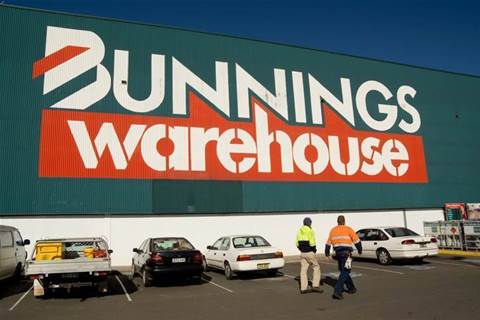 Tradies set to bypass the checkout.

The days of overwhelmed consumers wandering the aisles of Bunnings armed with little more than a sausage could soon be numbered.

The hardware giant has revealed it has started trialling click-and-collect in some stores ahead of a national rollout as part of its revamped digital strategy.

Parent company Wesfarmers’ half year results released on Thursday confirmed the poorly kept secret, which is set to pit the building and renovation supplies store against high street appliance retailers as Bunnings tries to boost range and basket sizes amid a cooling building market.

The move puts meat on the bones of Wesfarmers’ major data analytics play, as it seeks to digitise what to date has largely been a walk-in walk-out warehouse experience backed by a website that primarily acts as a catalogue.

Getting the digital side right for Bunnings is critical, even if its boss Michael Schneider on Thursday conspicuously played down the big push as “a slow burn” and “not something we think is material at this stage”.

That could be a very different story next year, especially if Bunnings pulls off the feat of making online sales profit margin accretive. The markers it has dropped in to place on digital and IT execution for investors on Thursday suggest that is exactly what it plans to do, and with laser guided precision.

The big problem traditional large retailers face retrofitting online sales to their business model is it simply costs a lot more to execute an online transaction than it does an over the counter one; a factor that translates to each online sale depleting profit.

Both Coles and Woolworths this week confirmed their online sales, which are still a nascent channel, are dilutive. The two supermarkets also conceded that they were in primarily the space because was what customers are demanded, essentially leaving merchants little choice and worse off.

Bunnings isn’t about to be led down that path.

One of the biggest problems it faces on busy days, especially weekends, is parking space and checkout queues when its stores are flat chat with tradies, home renovators, hobbyists and gardeners looking for everything from LED light bulbs to Rooster Booster.

What click and collect really offers is a queue-busting technology that can be paired with in-store purchases and save people the bother of trying to figure out why WD40 lives in the tool shop or replacement UV bulbs for bug zappers aren’t in lighting.

So while Bunnings prides itself on the knowledge of its floor staff, the reality is there’s a portion of profitable smaller basket footfall that just wants to get in and out fast and that includes tradies stocking up on consumables like Liquid Nails and Dynabolts.

There’s also a new deluxe service for tradies that heavily leverages analytics, which we’ll get to in a moment.

On Thursday’s earnings call Schneider spelled out where the analytics-driven click and collect (or CNC in the retail vernacular) is at. The program was beta-tested at a Victorian location and is now in the process of being expanded to Australia’s favourite sandpit, Tasmania, in April.

The view from there is to roll it out more widely across Australia in 2020, based on the learnings of the Apple Isle. What isn’t known is whether a drive-up or drive-through option is in the mix, but it doesn’t seem implausible given the forays of stores like Ikea.

Drive through for click-and-collect cement is a no-brainer.

Perhaps most importantly, Bunnings is not-so-quietly planning to extend its range, with Schneider naming bathroom, kitchen and home automation as key areas of opportunity.

That puts a swag of consumer appliances into the mix, ranging from clothes dryers to dishwashers and microwaves in addition to seasonal fast selling staples like cooling fans that prompt customer meltdown when sold out.

Schneider also revealed Bunnings has doubled down on digital loyalty for its core customer base of tradies, taking the covers off an expansion of its recently launched PowerPass app and store credit facility.

Launched in September 2018, Schneider revealed the app has already been ported to allow eligible members to search for products in-store, scan the item and self-checkout. Presumably, that means trade buyers can bypass the checkout by just flashing a receipt, though we’re not sure what happens to the rubber stamp.

Already trialled on click-and-collect power tools, Schneider estimated there were already 30,000 trade customers on the app, which is a lot more than a convenience tool when you look under the hood.

Having subsidised the credit card industry for decades, Bunnings has added trade credit and cash pre-pay facilities to PowerPass that allow online account management for ABN holders and owner builders.

Importantly, it means that trade customers can be steered away from more expensive payment instruments like credit cards and towards cheaper options like BPAY as services like the New Payments Platform gradually expand.

That hook is further baited with interest free periods of up to 60 days and lower rates that easily belt rates on bank issued cards for six.

A PowerPass Credit account for up to $5000 boasts a headline rate of 8.9 percent, around 10 percent lower than many credit cards which recently jettisoned Qantas Frequent Flyer points following a forced interchange fee reset.

A 30-day account can run a facility up to $10,000, amounts Bunnings is clearly betting will appeal to taking pressure off customer cash flow and let it steal the business of banks.

But the real icing on the digital cake is that Bunnings gets to harvest rich data off its most valuable customers without resorting to trying to marry credit card data with SKU data – one of the main reasons supermarkets launched loyalty schemes like Fly Buys and Everyday Rewards.

Digital receipting would also allow it to flick data back to apps tradies use like Xero or MYOB.

As payments inevitably migrate to digital wallets and phones, that could put Bunnings in the box seat in terms of using analytics and customer data to siphon market share from the likes of Harvey Norman, Bing Lee and the Good Guys.

As for speeding-up queues at the coin-powered sausage tent… that might have to wait until strategy day.