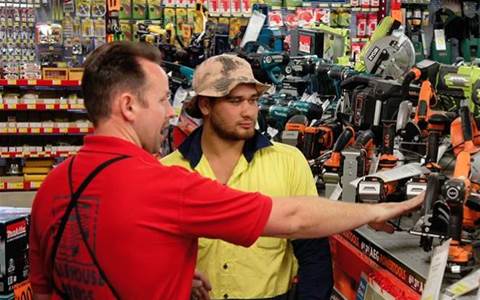 Australia’s Tradie-in-Chief, Bunnings Group managing director Michael Schneider, has revealed the hardware giant intends to fire-up its digital and omnichannel offerings across Australia by the end of this year, as the retailer hits the accelerator on the massive project.

The Wesfarmers-owned business on Thursday took the covers off its heavily-tested rollout plans that are regarded by the market as the litmus test for whether the mainstream Australian retail market can harness digital commerce to increase margins rather than have their profitability gradually eaten away.

The move by Bunnings to go to a full digital rollout in just six months is ahead of what many analysts were expecting. It's also on the fast side of previous guidance that had indicated a rollout across 2020.

Under the hood of the strategy is the heavy leveraging of Wesfarmers’ often secretive group data engineering capability from its Advanced Analaytics Centre it wants to extend across its businesses to increase productivity and efficiency and reduce costs.

“We believe that done right we will be in a position probably by Christmas this year to have all of our Australia network online, fully transactional, which is well inside the guidance we've been giving before,” Schneider told investors.

The key words there are “done right”.

The strategy revealed by Schneider on Thursday is a far cry from the margin eroding difficulties now being experienced by grocery giants Coles (which Wesfarmers spun off) and Woolworths which faces increased costs by people purchasing online, mainly because of logistics.

The key difference in the Bunnings approach has been to heavily test the digital offer – which is about a lot more than shifting sales into a different channel – at locations in Tasmania and Victoria to see what worked and what didn’t.

The digital offer essentially breaks down into a strong weighting towards click-and-collect, bolstered by traditional online ordering and delivery as an option.

Pressed by analysts as to whether customers could be buying less if they order online first – countering the bricks-and-mortar walk in for one thing, leave with three effect – Schneider said the test sites had determined that customers still wanted to “shop the store”.

“We've engineered out some processes in our stores to make way for this work to be done. So it's been really exciting for us. And we understand we're going to need to talk to customers in a different way about this. All of a sudden Bunnings Warehouse is going to be on your mobile phone and in your pocket.”

One of the big questions for Bunnings was where to physically put the click and collect counter.

For everyday retail customers, the collection point will be at the front of the store, Schneider revealed, noting that they had tried different options.

But it’s a slightly different story for tradies, the army of small business owners in vans and utes, who will get a drive-through option to quicken turnaround time on the way to a job or reloading for the next day.

At the last update, Schneider revealed the creation of the Power Pass app and card, which can includes a credit facility. While there’s always some margin in credit, the real gold has come in the form of accurate, timely and pertinent data about the daily habits of tradies and how to make their lives easier.

A major hurdle Bunnings has faced in terms of trade customers is that many tradies still perceive the store as consumer-grade rather than commercial grade – the quality of screws and fixings for example – as well as a perception of higher process.

Schneider set out to nail that shut, revealing that data and feedback helped along by Power Pass (as well as overall strategy) had prompted Bunnings to heavily bolster not only its dedicated trade staff, but also staffing ratios at different times of the day.

“We've introduced that across the store network, seeing fantastic results and connecting with a whole series of trade customers that we once weren't servicing properly.

“We've made enhancements to the to our Power Pass program, not just the product itself, but the technology that goes with it to make it easy for trade customers to purchase products. [Or to] order products the night before pop in, pick them up, transact themselves and get out of the store really quickly,” Schneider continued.

There were now over 500 trade specialists at Bunnings he said, adding that there were 700,000 trade customers on Power Pass.

On the staff level, Schneider noted that the ability of team members to focus on customer service on the floor was also being uplifted because better data insights into inventory levels and stocking meant less staff time was spent during trading hours restocking or finding stock.

The big in-store sell for Bunnings on mobile is that it also helps customers locate products – rather than locating or chasing down a staff member to find a product.

At the same time, the digital and data push was driving down manual and paper costs, like invoicing, cash handling and waste.

On the consumer side, Schneider said people shopped on a “project” basis and that this was reflected in groups of product purchases.

It’s not hard to see why either. Wall mounted shelves typically consist of wood, brackets, screws or fixings and a tool to put them together. These kinds of bundles can easily be put together in an online format alongside content that shows how, or how not to, undertake a task.

Take, for example, the fast selling chainsaw on a stick and why you don’t use one when up a ladder. Ever.

On the professional services side, Schneider stressed that Bunnings wouldn’t be encroaching on that channel but said it was more than happy to work with professional tradespeople and services organisations on everything from kitchen installation and window furnishings.

This too had been digitised, he said, noting that in the past, the offer was some “cards on a counter”.

As for the Google effect of going online and Bunnings clocking 20 million views a month to climb to all-time highs on Google search trends in April, Schneider was realistic about cause and effect when poked by an analyst as to whether there had been an uptick in sales.

“Not particularly one way or another,” the Bunnings boss said.

“I think trading patterns tend to be pretty consistent through the cycle. And obviously you've got different things like Easter and school holidays which blur the lines a bit as well.”