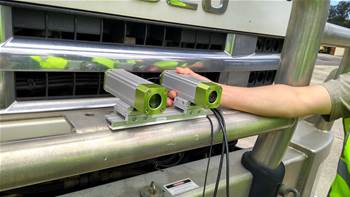 Brimbank City Council's garbage trucks will adopt a new role over the next six months to a year, automatically mapping damage to streets and other assets.

The trucks will carry GPS sensors and high-resolution depth video cameras, and use 5G to transmit imagery to an AWS-based system where it can be documented and assigned to a maintenance crew.

The project was conceived in response to the federal government’s 5G innovation initiative, and received $1.18 million in funding.

It is being run jointly by council and Swinburne University's 'factory of the future' and digital innovation lab, with Optus as the 5G partner.

Associate Professor Prem Prakash Jayaraman told iTnews the first application for the project will be to identify and report, in real-time, when someone's dropped a pile of hard rubbish without permission.

From there, the system will be expanded to photograph other damaged assets, such as roads, signs, bus shelters, and the like.

Management of that kind of asset is currently very manual: someone takes a car, drives around, and submits reports.

Professor Jayaraman said that real-time processing is important where public safety is involved.

For example, if a damaged tree is overhanging a road, council needs to get to it as quickly as possible. "A delay could be catastrophic," he said.

That's also why the project uses depth cameras rather than standard video cameras.

The cameras provide "something you can process, using standard computer vision algorithms ... to provide you depth, the distance from the camera", he explained.

Similarly, "when you take a photo, it's hard to determine the size of the object. With depth, there's much more information about size."

As well as sending data to the unnamed cloud service via Optus 5G connections, since garbage trucks cover every street in the local government area, often at a slow pace, they'll gather very granular data about network coverage and performance.

Professor Jayaraman said the network allows uploads at up to 900Mbps.

While garbage trucks are fitted with video cameras today, they're not uploading in real-time - "Someone has to go and fetch the video", he said, and that means a delay of up to 48 hours in getting information into the council's systems and acted on.

The City of Greater Bendigo previously used garbage trucks to test the signal quality of an IoT network it was establishing.