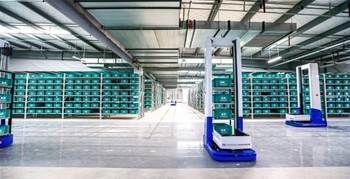 Booktopia will trial autonomous robots in its warehouse early next year as part of a proof-of-concept which would more than double the amount of stock the online retailer can hold.

The machines, from Hai Robotics, will be programmed to put away stock when it arrives in the warehouse and pick products from the shelves when they are sold.

Wayne Baskin, CTO and deputy CEO of Booktopia, told iTnews the retailer is the first in Australia to deploy the Shenzhen-based company's robots and the investment will allow the business to maximise its existing real estate.

The robots can move heavy loads and reach up to five metres, allowing the warehouse to add more high-density shelving, increasing the distribution centre’s capacity from 800,000 units to 1.8 million units.

“We know that when we have a product in stock we will ship four times as many of that product as when it's not in stock,” Baskin said.

The investment will enable Booktopia to ship up to 100,000 units a day from its distribution centre, up from 60,000 today.

The proof-of-concept builds on the retailer's most recent automation project, completed in October, which doubled the number of units it can ship from its warehouse using new packing and sorting machines.

“We know that's going to give us the capacity to really grow in the future and this is really about future-proofing the business,” Baskin said.

Throughout the months-long Covid sales spike, Booktopia has been able to stretch its outbound capacity to 35,000 units.

This year the retailer has taken on an additional 3000 sqm of space next door, building conveyors through the adjoining wall to two new packing machines that can pack 800 parcels each per hour.

Instead of using a fixed-size box, the machines measure the product and fold the box around the parcel, eliminating any bubble wrap.

A new sorting machine has also come online which can be programmed to automatically sort parcels by states, region, cities before being handed over to Australia Post to cut down overall delivery times.

“We now have the ability really to do some really deep sorting and get some efficiencies out of that,” Baskin said.

Baskin said the current level of automation won’t have an impact on Booktopia’s staff numbers but the e-tailer will eventually scale back its use of labour hire companies which are brought in during busy periods.