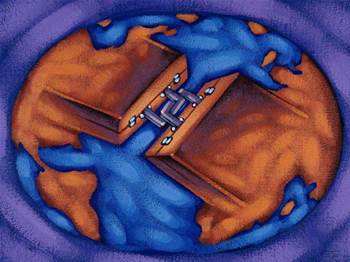 A method for making a one atom thick sheet of carbon has been developed by researchers at the Rensselaer Polytechnic Institute.

Graphite, as found in most everyday pencils, is made up of countless layers of graphene, but for years scientists battled to separate out the individual layers.

Using ordinary adhesive tape the researchers managed to obtain single strips of graphene simply by using the gentle stickiness of the tape to break apart the layers.

Graphene is a very efficient conductor, making it ideal for use in nanoelectronics, and two years of research has revealed detailed information on how the length and width of graphene directly affects the material's conduction properties.

Saroj Nayak, an associate professor in Rensselaer's Department of Physics, Applied Physics and Astronomy, along with graduate student Philip Shemella and their team, have outlined their findings in the 23 July issue of Applied Physics Letters.

The size of computer chips has shrunk dramatically over the past decade, but has recently hit a bottleneck, explained Nayak.

As copper interconnects get smaller, the copper's resistance increases and its effectiveness as a conductor degrades. This increase in resistance creates heat, which can have negative effects on the speed and performance of the chip.

Because of graphene's excellent conductivity it is considered to be a possible successor to copper.

Even at room temperature, electrons pass effortlessly through metallic graphene, meaning that a graphene interconnect would stay much cooler than a copper interconnect of the same size.

Carbon nanotubes, which are essentially rolled-up graphene, are another potential heir to copper, but they suffer from similar setbacks to those of graphene.

One of the major limiting factors is that when single-walled carbon nanotubes are synthesised, about one-third of the batch produced is metallic and the remaining two-thirds are semiconductors.

Currently it is extremely difficult to separate the two on a mass scale. However, recent research at Rensselaer and elsewhere shows that graphene could be produced in a more controlled way.

"Fundamentally, at this point, graphene shows much potential for use in interconnects as well as transistors," Nayak said.

Nayak added that, although the potential is there, research into this possibility is still at a very early stage.

With the likes of IBM and Intel taking notice of this material, research into its use could get a major boost.
Got a news tip for our journalists? Share it with us anonymously here.
Copyright ©v3.co.uk
Tags:
boffinscarboncircuitshardwareinpencil