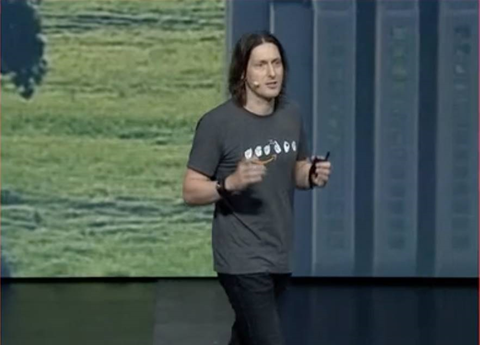 Glenn Gore providing a 2019 keynote at AWS Summit in Sydney.

And a new unspecified role in the Asia Pacific region.

Amazon Web Services’ chief architect Glenn Gore is leaving the cloud services provider after over 7.5 years to take up an Asia Pacific-based role in “a very different space”.

Gore was one of several top Australian cloud engineers to be snapped up by AWS at the start of 2013.

He held lead architecture roles in Australia, Asia Pacific and worldwide, and was a regular keynote speaker at AWS and third-party events as the cloud provider’s ‘chief architect’.

Gore announced his departure on Saturday in a LinkedIn post.

“7 years, 8 months and 8 days, an incredible journey to work hard, have fun and make history with AWS!” he wrote.

“It is too long a post to list the amazing experiences, places, customers, people and technology that have made up my time at AWS.

“AWS provided the opportunity to live in many places, travel the world and have a truly global impact.”

Gore said he was headed to an as-yet unspecified role in a ‘disruptive’ space.

“Now is the time for me to start something new in a very different space that I believe will be the thrd big disruption that I have been able to be part of in my career (the first being consumer access to the internet, second being cloud),” he wrote.

Gore told iTnews that the new role will bring him back to the Asia Pacific region.

At AWS, according to a speaker bio, he was “responsible for creating architectural best practices and working with customers on how they use the cloud and innovation to transform their own businesses or disrupt new markets.”

In a 2018 interview, Gore said he was “happiest when working with customers who have a very difficult problem to solve.”

“Accompanying the customer on the way to a solution, making the impossible possible – that’s what drives me and that’s why I love to get up each morning,” he told network operator Swisscom.

“I wake up happy and full of energy each morning. To be more accurate, I don’t sleep that much at all because my brain is always active and thinking about all the things I want to do the next day.”