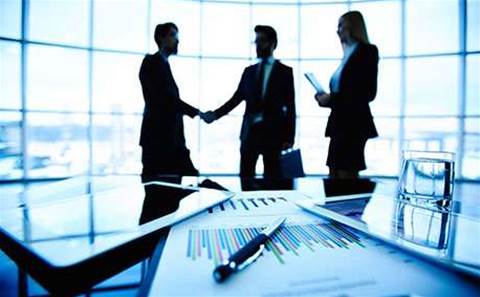 Australia's treasurers have formally agreed to start applying the GST to all sub-$1000 online purchases bought from overseas suppliers by mid 2017.

The agreement came during talks with the federal treasurer Joe Hockey and his state and territory counterparts today.

The treasurers had agreed in principle to the arrangement late last month, but cemented it officially today.

The approach will end the $1000 threshold at which the GST currently kicks in for online purchases of overseas products, and will apply from July 2017.

"This will deliver competitive neutrality for Australian businesses and will ensure there is a fair and equal treatment of all goods and services," Hockey said.

It brings an end to years of lobbying from bricks and mortar retailers like Gerry Harvey, who have long argued Australian businesses with physical retail presences were being disadvantaged by the online GST-free threshold.

The agreement means companies located overseas who sell product into Australia online will need to charge the GST to their products in the same manner as Australian businesses.

"If a business offshore is able to automatically charge less for the same goods and services that are sold in Australia, then ultimately it costs Australian jobs," Hockey said.

"And what we want to do is make sure that people pay their fair share of tax because after all if someone or a company is not charging the GST, then in those circumstances the taxpayers are ripped off."

Hockey said Australia's tax agents will now need to travel all over the world to ask online retailers to register for GST purposes.

As is domestically, only vendors with an Australian turnover of $75,000 will need to register and charge the GST.

He said he was confident big players like online retailer Amazon would take part, but could not guarantee smaller companies would comply.

Hockey did not comment on the cost of introducing the tax to sub-$1000 online goods, nor how much it was expected to reap the government.

"As goods would not be stopped at the border, administering a vendor registration model would have a relatively low cost," he said in a statement.

A 2011 Productivity Commission inquiry [pdf] recommended against lowering the threshold despite finding strong grounds for it to be reduced significantly, arguing it would cost more to introduce than it would reap.

The agreed GST changes to low-value online goods follow the government's introduction of its so-called 'Netflix tax', which from 2017 will require foreign companies selling digital goods and services into Australia to levy the 10 percent GST.

It is expected to reap the government $350 million over four years. The changes cover a wide area of goods and services, including music and movie downloads, software and some online education courses.