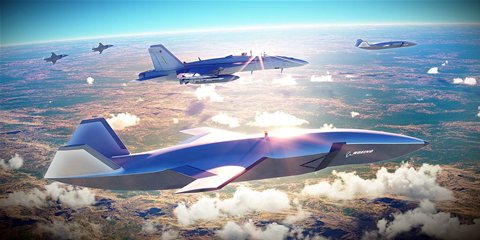 Minister Christopher Pyne and Defence Industry Minister Steven Ciobo announced the partnership with the aerospace company on Wednesday to progress research and development on the project.

The partnership will result in a concept demonstrator unmanned aerial vehicle (UAV) that will be used to progress the development of the Boeing’s new unmanned platform, dubbed the Boeing Airpower Teaming System.

“This will be Boeing’s first unmanned aircraft designed and engineered in Australia and represents the company’s largest investment of its kind outside of the United States.”

An initial concept, designed and developed in Australia, was unveiled at the Australian International Airshow on Wednesday.

The ABC reported the drone has been quietly developed in collaboration with the Royal Australian Air Force in Brisbane.

However the first flight remains some time away, with the drone not expected to take to the skies until 2020.

In a statement, Boeing said the UAV would provide “fighter-like performance”, capable of flying more than 3700 kilometres.

At around 12-metres in length, it would “integrate sensor packages onboard to support intelligence, surveillance and reconnaissance missions and electronic warfare”.

It would also use “artificial intelligence to fly independently or in support of manned aircraft”.

Around $10 million per year for the next four years will be invested to evolve the concept, with Boeing expected to partner with both big and small Australian businesses and research organisations for the delivery.

“The development and demonstration of this air vehicle will create around 100 new high-technology jobs in aerospace engineering and design in Australia, as well as wider job opportunities across the supply chain,” Ciobo said.

“This proposal could lead to another exciting step forward in Australia’s defence export strategy and provide our allies with critical capabilities based on Australian ingenuity.”