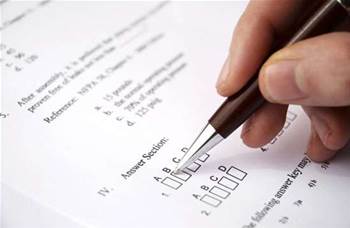 Let down by numeracy skills.

Australia has ranked sixth amongst OECD countries in a new report measuring proficiency in problem solving skills in technology-rich environments.

The study (pdf) of 166,000 adults in 24 countries is the first of its kind to directly measure skills in literacy and numeracy as they relate to a world increasingly driven by technology.

The OECD defined “problem solving in technology-rich environments” as the ability to use digital technology, communications  tools and networks to acquire  and evaluate information, communicate with others and perform practical tasks.

It specifically looked at whether people were able to solve work, personal and civic problems by making use of information accessed via computers and computer networks.

With internet access now pervasive in the workplace and over 70 percent of households in OECD countries having access to computers and the internet at home, the OECD report authors argued familiarity with and use of information communication technology has become almost a prerequisite for accessing basic public services.

However in most countries, the study found significant shares of adults had trouble using digital technology, communication tools and networks to acquire and evaluate information, communicate with others and perform practical tasks.

Across participating countries, seven to 27 percent of adults reported having no experience in using computers or lacked the most elementary computer skills, such as the ability to use a mouse.

In Australia 13.7 percent opted out entirely of the computer-based assessment part of the study. The Nordic countries and the Netherlands were found to be far more successful than other countries in creating an environment in which most adults have experience with computers.

The research saw Australia ranked 4th and significantly above average on literacy skills. But Australians fell below average for numeracy skills, ranking 13th.

In over half of all OECD countries, at least one-third of economic activity is concentrated in high-tech manufacturing, communications, finance, real estate and insurance, according to the report.

“This is likely to underestimate the impact of new technologies on the economy since many traditionally low-skilled sectors, such as primary production and extractive industries, are also using advanced technologies. Agriculture, for example, is being transformed by bio-technology and computerisation,” the report’s authors stated.

As a result, the demand for information-processing and other high-level cognitive and interpersonal skills is growing.

“In addition to mastering occupation-specific skills, workers in the 21st century must also have a stock of information processing skills and various “generic” skills, including interpersonal communication, self management, and the ability to learn, to help them weather the uncertainties of a rapidly changing labour market."