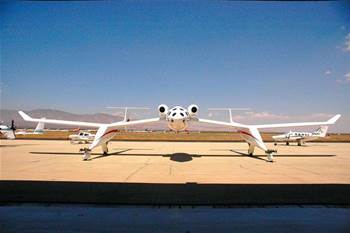 A 56-year-old Brisbane businesswoman, Glenys Ambe, will be the first Australian woman to be a Virgin Galactic space tourist – one of 11 Aussies to put down a deposit on a $280,000 ticket.

Fronting a scrum of media at a ‘launch' of sorts in Sydney this morning, Ambe said she had purchased the flight as a 60th birthday present to herself.

"By the time they've completed the tests it'll probably be about then [2012]," Ambe told reporters.

"It might be years before I get to fly but that's ok. Space will still be there and I can wait."

Virgin Galactic has already taken some 300 deposits worldwide for the commercial space flights, retailing through a network of "space travel agents" for US$200,000.

The goal is to sell at least another 200 tickets before launch - and 50,000 tickets in the first ten years of operation, though a drop in price to "around the price of a new car" may still be 15 years away.

The make or model of said "new car" wasn't discussed.

Virgin's head of astronaut sales, Carolyn Wincer, said the initial space pilots were from Virgin Atlantic, though it was hoped they would also train pilots from the local and regional carriers Virgin Blue and Pacific Blue respectively.

When launched, the commercial flights will be approximately two hours in duration, including four minutes of weightlessness.

Space Ship Two will have seating for six passengers and two pilots - required under FAA flight regulations although Wincer said it does not take two to pilot the ship.

The ship is carried to a height of 50,000 feet by a ‘mothership' known as White Knight Two, currently in testing in the Mojave Desert.

It is then detached from the mothership and free falls a short distance before the ship's hybrid rocket motor is ignited.

"It's instantly really noisy and you're pushed down and back into the seat with quite high G forces," Wincer said.

"The forces aren't harmful to your health but they're enough to make you feel alive," Wincer said. "The worst is six Gs for around two seconds."

Virgin Galactic tested 70 potential customers in a centrifuge in 2007, exposing them to gravitational forces above 6 Gs for 20 seconds. Ninety four per cent made it through without complication.

"There's no data on what happens to normal everyday people when you put them under those kinds of G forces," Wincer said.

The ship uses a technique known as wing feathering to make its descent and re-entry back into the atmosphere. The idea is an adaptation of the structure of a badminton shuttlecock, which corrects itself to fall in the same position no matter what angle or speed it is thrown at.

The ability to fold back its wings and ‘de-feather' them again at 70,000 feet is one of the main safety features Virgin is touting, alongside the hybrid rocket motor and carbon composite construction of the ship.

"During re-entry the pilots do absolutely nothing," Wincer said.

"They can read a newspaper. There's nothing for them to do because physics takes over."

Wincer said Virgin will pilot some 30 flights into space "before we let our customers anywhere near the ship".