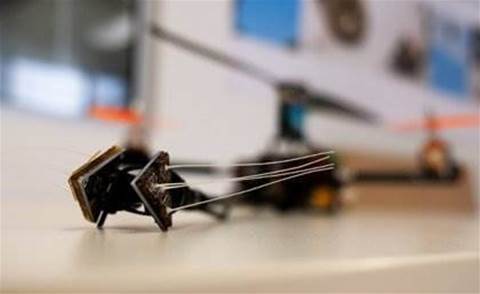 An engineer at the University of Queensland has drawn inspiration from one of nature’s most powerful sensory structures - whiskers - as a way to improve drone performance in close quarters.

Whiskers are far more than a cute facial feature on a wide variety of animals - harbour seals have been shown to use their whiskers to follow the movements of fish from hundreds of metres away, and even detect the breath of fish resting on the ocean floor.

The extreme sensitivity of whiskers to minute forces led Dr Pauline Pounds and her team to explore the potential use cases of biomimicry in robots and drones that work in ‘peripersonal space’, or the region immediately around a person but not in direct contact.

“They are attached to small force-transmitting plates that are glued onto a miniature tripod of pressure sensors, which can then detect tip loads as low as 0.33 milligrams – less than the weight of a flea.

“They can be used to measure fluid velocity, as well as to detect the bow-wave of oncoming air of an approaching object before it actually touches the whiskers.”

The array proved sensitive enough to measure human breath from half a metre away.

While initially envisioned for use in close quarters with humans, Pounds said the simple array could have applications in a wide variety of industries, allowing smaller drones to navigate and stabilise in turbulent environments with limited visibility without having to mount heavier sensors.

“You can use the whiskers anywhere you want to measure force, like in machining applications, in industrial fabrication, in medicine, in marine systems, in aerospace – the possibilities are endless.”

It could also make Boston Dynamics’ unsettlingly agile robots more dog-like and even better at chasing us down.