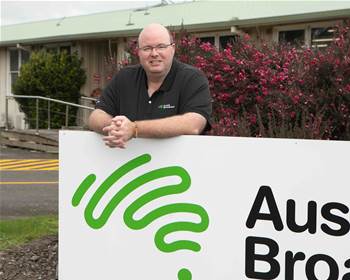 Sees convergence of factors driving its fortunes through to FY23.

Aussie Broadband is hoping strong growth in residential and business broadband, combined with its acquisition of Over The Wire, can collectively power a further spurt in connections and revenue through 2022 and beyond.

The retail service provider (RSP) provided a business update for the quarter and half-year ended December 31 on Tuesday, showcasing both its growth prospects and opportunities.

Broadband connections overall were up 11 percent quarter-on-quarter, with business connections up 13 percent. Mobile services were also up nine percent.

“There has been strong growth and we continue to grow well,” managing director Phillip Britt told iTnews.

“With the combination of what we’ve done and [the acquisition of] Over The Wire, we’re setting up FY23 to be a fantastic year.”

The company’s first white-label customer has been widely reported as Origin Energy. The utility’s existing internet customers are in the process of being migrated across to Aussie Broadband.

“Wholesale and white-label net additions for the second quarter were 17,826, made up of 8725 migrated white-label services in addition to net organic growth of 9101 services during the quarter,” Aussie Broadband said in a financial filing.

“Further white-label services will be migrated in the third quarter in addition to regular white-label organic growth.”

Britt told iTnews that Aussie Broadband had worked with its managed service provider and white-label partners to hone their offerings and drive new sign-ups.

“Obviously we’ve got a lot of experience in broadband so we’ve been helping our partners to increase their experience in that space, which obviously benefits us as well,” Britt said.

“There’s more to value in a product than just the price. It’s about explaining the differences between our offering and other providers’ offerings, and knowing the techniques around that.

“Some people see value in the high level of customer support that we provide and are prepared to pay that little bit extra for it. That flows through into the white-label space as well.

“We don’t discriminate against our white-label customers. They get the same service that an Aussie customer gets, so that helps with the value proposition with them.”

Britt said that Aussie Broadband’s local support model had worked to its advantage over the past couple of years, during a time when rivals with offshore support centres struggled to keep them operating at capacity.

He added that the migration of existing broadband users under the white-label arrangement would wrap up by mid-February.

In the business market, Aussie Broadband said it had taken “15 percent of NBN enterprise ethernet service orders in FY22 year to date”.

Britt confirmed that was a 15 percent share of all enterprise ethernet orders placed with NBN Co, and said Aussie Broadband’s market share overall was similar.

“We’ve been a strong taker of enterprse ethernet services since it launched as a product so our market share in that space is a similar number,” he said.

“We think we can take more in that space once we’ve got Over The Wire completed and in our team,” Britt said.

“That’ll help because broadband is just one part of the story. You need a whole services mix to really hit that [business market effectively].”

Britt noted that in addition to reselling enterprise ethernet services from NBN Co, Aussie Broadband also had its own business fibre that it could run services on as well.

“We use both products,” he said.

“Our preference is obviously Aussie fibre because it’s on our network, [and offers a] higher margin, but where we don’t have our network then we use enterprise ethernet.”

Aussie Broadband is approaching the end of its participation in NBN Co’s ‘focus on fast’ marketing campaign, which temporarily reduced the price of high-speed services for customers, while boosting their bundled connectivity virtual circuit (CVC) bandwidth capacity.

The campaign saw RSPs upgrade existing users to the higher speed tiers en masse, only to downgrade most of them again at the end of the promotion, according to ACCC figures.

Britt did not believe Aussie Broadband would fare much better in terms of conversion ratios once the promotion ended.

“The conversion rates have been quite low, which is what we told NBN Co they would be,” Britt said.

“Whenever you ‘force migrate’ or put those sort of offers through, generally people go back to what they were doing [before the promotion].

“People have got to see the value in the higher speeds. Giving them a taste sometimes is a way of doing it, but I think there’s better ways of doing it rather than the way NBN Co structured focus on fast.

“The majority of those customers will head back to their original plans.”

Britt said that unless an upgraded household had high internet-based activity levels in the trial period, they may not have seen enough difference in internet speeds to warrant paying for 250Mbps services instead of 100Mbps, for example.

Britt added that he hoped to see more substantive action on NBN pricing through an ongoing review.

“Hopefully the ACCC will sort out the pricing madness of NBN,” he said.

Revenue for the first half of FY22 is expected to increase by $36.7m or 19 percent over the second half of FY21, the company reported.

Gross revenue is expected to come in at $237.3 million and statutory revenue at $229.3 million, according to unaudited management accounts.