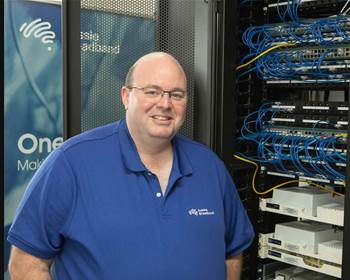 Aussie Broadband is pushing NBN Co to widen a pricing restructure by offering a single flat price for 50Mbps tier services, which account for 58 percent of all active fixed-line connections.

NBN Co is proposing to scrap variable connectivity virtual circuit (CVC) charging on plans of 100Mbps and above, but to retain the charges on 25Mbps and 50Mbps services.

Not having to deal with CVC would greatly simplify the way internet providers manage NBN customers and usage, and reduce unpredictable costs.

All the top retail service providers (RSPs) want CVC-free, flat wholesale pricing, though it has taken an ACCC-led process to get to this point.

Still, what was put on the table by NBN Co just before Christmas would not change anything for more than 80 percent of active customers, which are on 50Mbps services or below.

Aussie Broadband’s Phillip Britt told iTnews that CVC-less pricing should be extended to the popular 50Mbps tier, which accounts for about 58 percent of all NBN fixed-line users.

“Those customers are using more than their inclusions on a regular basis. It’s where the main cohort is, so it needs to be picked up and included with that flat-rate model.”

The exclusion of 50Mbps users from flat pricing is likely to be for economic reasons.

NBN Co has consistently raised concerns about its ability to grow revenue if CVC ceases to exist.

The network operator's proposal right now is to maintain the status quo for over 80 percent of users and to offer flat pricing for the others albeit with yearly price increases at “CPI+X”.

Currently, that would be a sizable yearly price rise - in excess of six percent a year on plans 100Mbps and above. This is based on a CPI of 3.5 percent and X being set by NBN Co at three percent.

NBN Co argues it needs these yearly increases on flat-priced services to account for the “novelty and unknown impact on demand” that not being able to charge for CVC would have. It has previously denied the yearly increases are just CVC by another name.

However, NBN Co is clearly hoping to maintain its CVC revenues on the vast majority of services, and that consistent price rises on the higher-tier services will help it break even or reduce the risk of a revenue shortfall or slower revenue growth on faster services.

But the challenge of selling a 6.5 percent a year wholesale price rise on 100Mbps-plus services is going to be a tough one.

“I think if you told retail customers their internet was going to go up six percent a year there’d be some heads on the chopping block at government level,” Britt told iTnews.

“The CPI side of things isn't sustainable. It probably makes sense in some economic modeller’s head but it’s not going to fly for where Australia and the NBN is at, I don’t think.”

Another outstanding issue is when retail service providers (RSPs), Aussie Broadband included, might see any relief in NBN prices.

The push for substantive price change long pre-dates the ACCC’s involvement in the issue.

The ACCC became involved only after NBN Co and the industry reached an impasse, in no small part due to the timeline NBN Co proposed for giving any consideration to a broader pricing shake-up.

With a price proposal on the table, albeit one that does not tick all the boxes, one of the challenges RSPs now face is the extent to which they dissect it and press for a better deal, knowing that could delay the introduction of any changes.

RSPs may face pressure to accept the terms of NBN Co’s partially CVC-less model, if it means getting it implemented faster.

Aussie Broadband’s Britt said he would welcome some interim price relief - something he has previously called for - but not at the expense of long-term change.

“NBN Co’s strategy has been to give a little bit to shut the industry up effectively and then we’re back at the same point again 12 or 18 months later,” Britt said.

“If this [partial flat-price model] is going to be some interim relief, that’s fine, but it needs to come with a caveat that [NBN Co] are going to properly sort it out within a relatively short timeline.

“If they want to put this change in from say July 1 and run it, then happy days, but it needs to be then properly fixed within 12 months from that.”

Ultimately, Britt suggested the CVC model had run its course: “I think they just need to accept that it needs to go, and move on.”

With the danger of a protracted price model renegotiation still confronting the industry, despite everything that occurred in 2021, Britt suggested it is time for the ACCC to act.

“Aussie is certainly hoping that the ACCC gets in and does what it needs to do here, because NBN Co’s had plenty of chances to sort this out before now,” Britt said.

“[What’s on the table is] a good start … but I still think there’s more to go, and it’s really going to take the pressure from the ACCC to get it there.

“RSPs have been banging this drum for a long time. It needs regulatory intervention now.”