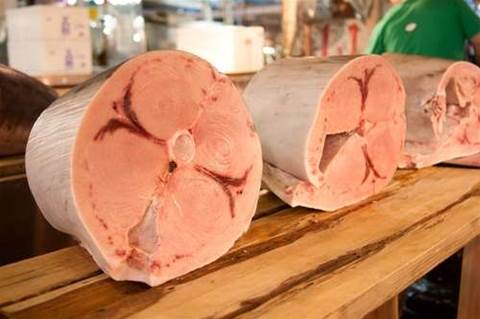 Australian Fisheries will trial stereo video technology to electronically measure the weight of up to 40,000 live southern bluefin tuna as they are transferred from tow cages to fish farms.

The tuna, which can weigh up to 200kg and measure 200cm each, are fattened in the farms - known as ‘grow out pontoons' - for several months before they are harvested and sold, typically to Japan.

The fish are caught in the Great Australian Bight and transferred from nets at sea into large tow cages, which the boat tows to a farm site in coastal waters at a rate of 1 to 2 knots.

The fish are then transferred from the tow cages to a grow-out pontoon.

Prior to this transfer, a sample of 40 fish are caught and weighed to establish an average weight of each tuna in the cage.

Underwater mono video is currently used to count each fish transferred to the pontoon. This count is then multiplied by the average weight to determine how the catch affects Australia's total allowable catch of the tuna.

Allowable catch is regulated by the Commission for the Conservation of Southern Bluefin Tuna, which last year tightened quotas in a bid to replenish global fish stocks.

Australia's national allocation for the next two years is 4,015 tonnes per year.

The Australian Fisheries Management Authority will seek to trial stereo video or similar technology on 10 percent of fish transferred between the tow cages and grow-out pontoons this season.

The technology is expected to determine the size of a sample of tuna and convert it to weight estimates automatically.

The kit will be attached to a transfer gate between the tow cage and pontoon.

Fisheries said a single catch transfer can take up to 12 hours to complete.

"It is expected that three to four transfers consisting of at least 30,000 to 40,000 fish will need to be monitored by the successful proponent's equipment."