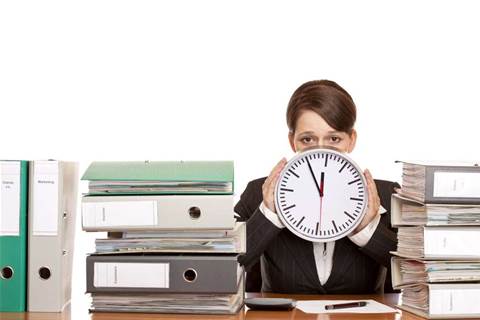 Is your workplace culture keeping women out of senior roles?

If you find yourself working late to make up time you spent dropping the kids at school, or fielding calls and emails at all times of day, night and weekend - rethink.

It's not just damaging your own work-life balance but it could be why few women are represented in your senior management ranks.

A new study to be launched next week [pdf] argues that women pay a hefty price because men don't get the flexible work arrangements they want.

Unless men feel they can ask to work flexibly without damaging their career prospects, women will continue to carry "most of the burden of maintaining a home and raising the children", researchers say.

Men At Work: What they want and why it matters to women is the brainchild of The 100 Percent Project, a Melbourne thinktank aimed at redressing under-participation of women in senior ranks.

The study finds men value work-life balance but few will ever ask their employers to have it.

"The top reasons for this include the belief that such a request would have negative effects on their career and that employers look negatively on employees who take advantage of work-life balance initiatives," the study says.

"As they can't share this burden, more women than men will continue to ask for flexible working arrangements such as part-time work."

That, the authors say, will lead to women being excluded from consideration for senior roles because it taps a stereotype that work-life balance initiatives are used only by "women who are not committed to their careers".

Commitment is shown by putting work first, being always available and not trying to reduce your hours.

Work-life balance and flexible work initiatives are frequently not seen as attributes of commitment.

"The whole concept of work-life balance doesn't come out to play in senior management stakes," says Leigh Berrell, a director of The 100 Percent Project and CIO of Yarra Valley Water.

"I think it's a sad indictment that many senior managers don't recognise you could probably get just as much value out of people and give them balance in their lives."

Although a new generation of workers is expected to usher in that change, the reality is unclear and further research is being undertaken.

"We are told incessantly that this problem will fix itself because new generations of men are different and they expect something different," Project chair Frances Feenstra says.

"As a result of that, flexible work practices will become more acceptable and that the problem will be solved for women."

However, change is slow and Feenstra is hopeful a quicker course of action emerges with current C-Level and senior managers leading by example.

CIOs can play their part in breaking the 24x7 cycle and promoting work-life balance.

Berrell notes a simple way of promoting work-life balance in his IT team is to set expectations that it's OK to leave on time.

"In many IT departments staff won't go home until the boss has gone home, because they want to be seen to be working late because that's what it's seen to take to get ahead," Berrell says.

"You see that culture promoted everywhere and it's really counter-productive, because you're not going to get the best out of your people."

Berrell says he makes it "very clear" when he is going home.

"I often walk around the department and let staff know that there's no brownie points for staying back after I've gone," he says.

"If you've finished your work then get out of here, if you're not then feel free to stay but I'm not expecting you to be here after I go home.

"I've never had anyone show any sort of adverse reaction to me telling them I don't expect them to hang around until nine o'clock every night. People are happy to go home."

Another way CIOs can make their mark is by considering flexible hours and job-sharing arrangements for new positions.

"A lot of managers just don't want to go to the effort of trying to work out how to accommodate someone who doesn't want to work the standard 8.30-to-5.30 week," Berrell says.

"Typically it's not that hard to adjust people's roles so that they can work flexibly - come in early or go home early or have a shorter working week for commensurately pro-rated pay or even job share.

"I think managers need to be a little more creative in the way they approach job design and workplace management and look for ways that can satisfy both the requirement of the role and requirement of the person who's in the role."

Feenstra underlines the importance of managers making sure their words and actions match.

"For instance, [managers] will say, 'I believe in work-life balance so what I do is I take my kids to school on Thursday mornings and don't get to work until 10'," she says.

"That's nice but it's not really going to change much because they might walk in at 10 but they'll then stay until 10 o clock at night, so they're still working well beyond a 'normal' day.

"What they've really role-modeled is that if you spend time taking your kids to school you have to make up for that at the other end."

Feenstra says she hopes managers will use the Project's research to "really think about what the message is they're sending to the organisation" through their own actions, which end up defining workplace culture.

"People look at their senior people - it's where they take their cues from," she says.

"[Senior managers] have to do something a bit different."

The 100 Percent Project launches the research on Tuesday 30 August in Melbourne. Tickets are available through its website.