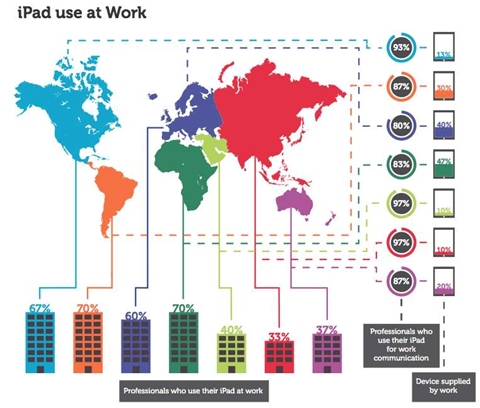 Survey says more so than US and Europe.

Executives from Australia and New Zealand are far less inclined to replace their laptops with iPads than in any other region, according to analyst firm IDG.

This compared with over 60 percent of respondents to the survey worldwide.

Just 37 percent of A/NZ respondents said they used their iPads at work, almost half the percentages found in the US, South America and Europe.

“In many ways, IT and business professionals in Australia and New Zealand use their iPads conservatively,” the report notes.

“Only 40 percent see their iPad as a complete or partial replacement for a laptop (compared with 64 percent worldwide).

"Professionals in Australia and New Zealand are also far less interested in using iPads as substitutes for PCs. Levels of usage on the move are the lowest in the world.”

The survey found that only 12 percent of business users across the globe said their iPad had completely replaced their laptop, while six percent said it had replaced their PC.

About 20 percent of workers in A/NZ had their iPads supplied by work.

IDG concludes the iPad is more a “supplement” than a substitute for the laptop, which has allowed travelling executives to carry around laptops less.

Still, of the devices the iPad “partially replaced”, the deepest cuts were to the notebook at 54 percent, followed by the smartphone (43 percent), desktop (33 percent), MP3 player (31 percent), TV/DVD (33 percent) and game console (28 percent).

Australia was estimated to have purchased about 1.2 million tablets through 2011, of which 71 percent were iPads, Australian analyst firm, Telsyte reported in June last year.