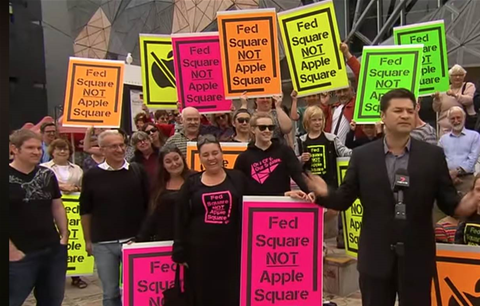 Critics rally to prevent retailer from setting up shop.

Opponents of plans to build an Apple store on Federation Square in Melbourne want to raise $40 million to outbid the tech firm for the building it wants to use.

The flagship store was announced just before Christmas in 2017 and requires the existing Yarra building on the square to be demolished.

However, the plan has been met with consistent opposition, primarily through the organised group ‘Our City, Our Square’ created a year ago.

That group on Sunday launched a last-ditch bid to keep Apple out of Federation Square through a massive crowdfunding campaign via Pozible.

“The idea behind this audacious plan is to raise enough money to buy this building back from Apple,” Our City, Our Square spokesperson Brett de Hoedt said.

“Essentially the Victorian Government has sold it to Apple.

“It might be absurd that the taxpayers have to raise their own money to buy back a building they already own but that is the game we are now playing.

“Even if we don’t reach the $40m target, we highlight the absurdity that we have to raise money to buy back a building that is already ours. It still highlights an unjust situation.”

Apple faces another challenge in getting access to the site, with the whole of Federation Square currently being considered for heritage listing.

Several thousand public submissions have already been received on the heritage listing application. Public hearings will also need to be held, with a final decision not expected until at least April.

"Heritage is about the meaning of a building or a place to the city. And Federation Square more than any other single place across the state means more to more people more often than anything else.

"Can we just keep this place for the people rather than for selling tech?"